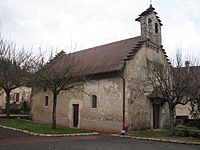 Arbignieu is a former commune in the Ain department in the Auvergne-Rhône-Alpes region of eastern France. On 1 January 2016, it was merged into the new commune Arboys-en-Bugey.

471 people lived in the commune. The inhabitants are the Arbignolans. The local economy is mostly based around agriculture and wine. The most important monuments in the commune are the Boule de Gargantua, a block of sandstone moved there by the giant Gargantua (referring to the main character from the novel Gargantua by François Rabelais), the Peyzieu church and the ruins of the Château de Longecombe, a castle from the 12th century. Famous people from Arbignieu include Césaire Nivière, an agronomist from the 19th century.

All content from Kiddle encyclopedia articles (including the article images and facts) can be freely used under Attribution-ShareAlike license, unless stated otherwise. Cite this article:
Arbignieu Facts for Kids. Kiddle Encyclopedia.