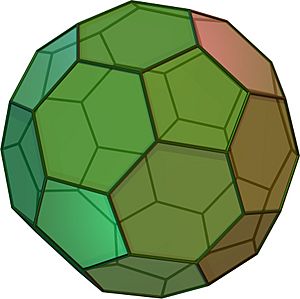 A truncated icosahedron looks like a soccer ball. It is made of 12 equilateral pentagons and 20 regular hexagons. It has 60 vertices and 90 edges. It is an Archimedean solid

In geometry, an Archimedean solid is a convex shape which is composed of polygons. It is a polyhedron, with the following properties:

Depending on the way there are counted, there are thirteen or fifteen such shapes. Of two of these shapes, there are two versions, which cannot be made congruent using rotation. The Archimedean solids are named after the Ancient Greek mathematician Archimedes, who probably discovered them in the 3rd century BC. The writings of Archimedes have been lost, but Pappus of Alexandria summarized them in the 4th century. During the Renaissance, artists and mathematicians valued pure forms and rediscovered all of these forms. Johannes Kepler probably completed this search around 1620. 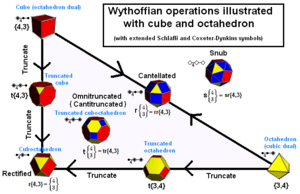 Platonic solids can be turned into Archimedean solids by following a series of rules for their construction.

The following is a listing of all Archimedean solids

All content from Kiddle encyclopedia articles (including the article images and facts) can be freely used under Attribution-ShareAlike license, unless stated otherwise. Cite this article:
Archimedean solid Facts for Kids. Kiddle Encyclopedia.