Arcola is a city in Douglas County, Illinois, United States. The population was 2,916 at the 2010 census. The city was founded in 1855, when the Illinois Central Railroad was built through the county. The railroad itself was responsible for surveying, platting and founding the town.

Arcola is somewhat famous for the Lawn Rangers, a "precision lawn mower drill team" that marches in formation with brooms and lawn mowers while wearing cowboy hats. Every year since 1980, the Lawn Rangers have marched in the Arcola Broom Corn Festival Parade. The event, held the weekend after Labor Day, honors Arcola's position in the late 19th century as a center of broom corn production. The Lawn Rangers were so named because the Grand Marshal of the Parade in 1980 was Clayton Moore, famous as the Lone Ranger, and they were named in his honor. This unique custom was publicized by humor columnist Dave Barry, who marched with the Lawn Rangers in 1995. 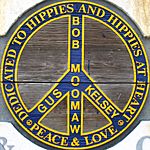 A nationally known tourist attraction, Rockome Gardens, which features large formal gardens, concrete fencing and architecture, buggy rides, and many special events from May through October, is conveniently located just outside the town of Arcola.

Arcola is also known for housing the world's only Hippie Memorial, created by Bob Moomaw. He died in 1998. He worked as a railroad clerk and tax assessor, but did not like either job. As an eccentric, independent artist with strong beliefs, he was able to give voice to his feelings, passions and opinions through his art and the writing on the sides of his buildings. He created the 62-foot-long artwork starting in 1992 to say something about his life and the era during which he lived. A nearby marker gives an interpretation of his work.

In the countryside surrounding nearby Arthur, Illinois, is a prominent community of Old Order Amish, the largest in Illinois. Amish farms occupy much of the farmland west of Arcola, with the highest concentration of Amish businesses around Arthur and the unincorporated communities of Chesterville, Illinois, Bourbon, Illinois, and Cadwell, Illinois. Arcola is home to the Illinois Amish Interpretive Center. This Old Order Amish Museum opened in 1996 and features exhibits on most aspects of Amish life, as well as an introductory video about the Central Illinois Amish. Through the museum, tours can be scheduled of the Amish countryside, Amish homes, farms, and businesses, and meals in Amish homes can be scheduled as well.

Grain elevators at the intersection of Route 133 and US Route 45.

All content from Kiddle encyclopedia articles (including the article images and facts) can be freely used under Attribution-ShareAlike license, unless stated otherwise. Cite this article:
Arcola, Illinois Facts for Kids. Kiddle Encyclopedia.