Kids Encyclopedia Facts
This page is about the village in County Limerick. For other uses, see Ardagh.

Ardagh (Irish: Ardach) is a village and civil parish in County Limerick, Ireland. The village is situated on the R523 regional road. The nearest town is Newcastle West, about three miles away, on the R521 road to Foynes and Shanagolden. The parish is bounded to the west by Athea, to the north by the parish of Coolcappa, to the east Rathkeale and to the south by Newcastle West. The local GAA team is known as St. Kierans, a club which represents both the parish of Ardagh-Carrigkerry as well as Coolcappagh-Kilcolman.

On 5 March 1867, in the Fenian Rising, an unsuccessful attempt was made by local Fenian supporters to capture the local Royal Irish Constabulary (RIC) barracks. Many of them were subsequently arrested. 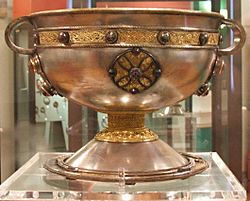 In 1868, the Ardagh Hoard including the 8th century Ardagh Chalice, was found in Reerasta Rath near Ardagh. The chalice is held in the National Museum of Ireland in Dublin.

All content from Kiddle encyclopedia articles (including the article images and facts) can be freely used under Attribution-ShareAlike license, unless stated otherwise. Cite this article:
Ardagh, County Limerick Facts for Kids. Kiddle Encyclopedia.