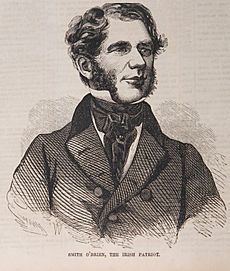 William Smith O'Brien (Irish: Liam Mac Gabhann Ó Briain; 17 October 1803 – 18 June 1864) was an Irish politician. At one point he was a member of the British Parliament. Later on he was a nationalist and leader of the Young Ireland movement and led a rebellion against British rule in the 1840s during the Potato Famine. He was convicted of treason, a felony, and could have been executed, but he was exiled to Van Diemen's Land instead. In 1856, he was pardoned and allowed to return.

All content from Kiddle encyclopedia articles (including the article images and facts) can be freely used under Attribution-ShareAlike license, unless stated otherwise. Cite this article:
William Smith O'Brien Facts for Kids. Kiddle Encyclopedia.