Ardgroom (Irish: Dhá Dhroim, meaning two drumlins) is a village on the Beara peninsula in County Cork, Ireland. Its name refers to two gravelly hills deposited by a glacier, Dromárd and Drombeg. It lies to the north north west of Glenbeg Lough, overlooking the Kenmare River estuary. It sits between the coast and the Slieve Miskish Mountains. The village contains a shop, post office, a petrol station and "The Village Inn" pub. 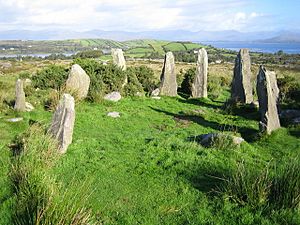 Near the village lie a number of megalithic monuments. Signposted is the stone circle to be found to the east of the village at a distance of about 1 mile, off the old Kenmare road. It has the name "Canfea" but is normally called the "Ardgroom" stone circle. About 1 mile north east lie the remains of another stone circle.

The circle consists of 11 stones, 9 of which are still upright with one alignment stone outside the circle. Unusually for a stone circle, its stones tend to taper toward points.

Also in the vicinity are the remains of at least 2 ring forts and a number of standing stones and stone rows.

All content from Kiddle encyclopedia articles (including the article images and facts) can be freely used under Attribution-ShareAlike license, unless stated otherwise. Cite this article:
Ardgroom Facts for Kids. Kiddle Encyclopedia.