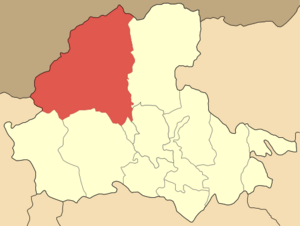 Aridaia is a Greek town in Pella Prefecture in the region of Macedonia. It is found in the middle of a valley north of Edessa. It has a population of 5,600 inhabitants according to the 2001 census. During Byzantine era, its name used to be Moglena and during the Ottoman Empire its name used to be Subotsko. It was first founded by the emigres of Asia Minor (Anatolia) in 1923.

All content from Kiddle encyclopedia articles (including the article images and facts) can be freely used under Attribution-ShareAlike license, unless stated otherwise. Cite this article:
Aridaia Facts for Kids. Kiddle Encyclopedia.