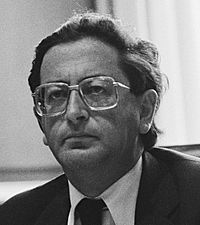 Pais also was a member of the municipal council of Amsterdam and of the provincial states of North Holland.

Before his political career he was a economics professor at the University of Amsterdam, and afterwards a banker at the European Investment Bank.

Pais is a vegetarian and an animal protection activist.

All content from Kiddle encyclopedia articles (including the article images and facts) can be freely used under Attribution-ShareAlike license, unless stated otherwise. Cite this article:
Arie Pais Facts for Kids. Kiddle Encyclopedia.