Aripeka is an unincorporated community and census-designated place (CDP) in the U.S. state of Florida, along coast of the Gulf of Mexico at the border dividing Pasco and Hernando counties. The ZIP Code for the community is 34679, but it was originally assigned as 33502. As of the 2020 census,the population was 320.

Similar in geophysical structure to Hernando Beach, Bayport, and Pine Island, Florida, Aripeka is surrounded by marshland, mostly within Hernando County. The Pasco-Hernando County line is located at the South Hammock Creek Bridge. 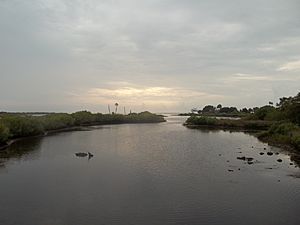 The South Hammock Creek, looking west from the bridge

The community of Gulf Key was settled in this area in 1873, and a post office by that name was established in 1883. The post office was briefly known as Argo. It was replaced by the Aripeka post office in 1895. Aripeka is named for an early-19th century Seminole chief who is thought to have lived nearby. The town was divided when Pasco County separated from Hernando County in 1887. The post office, which was originally in Hernando County, moved across the Pasco County Line in 1921. According to the historical marker in the town, Babe Ruth visited Aripeka to fish. On June 3, 1993, the Pasco County Historic Preservation Committee dedicated the town a State Historic Site.

The main road through Aripeka is County Road 595, named Aripeka Road in Pasco County and Osowaw Boulevard in Hernando County. This road was part of the original Dixie Highway and suffers frequent flooding in the heart of town due to its close proximity to the water. CR 595 leads southeast 1.8 miles (2.9 km) to U.S. Route 19 and northeast 4 miles (6 km), also to US 19.

All content from Kiddle encyclopedia articles (including the article images and facts) can be freely used under Attribution-ShareAlike license, unless stated otherwise. Cite this article:
Aripeka, Florida Facts for Kids. Kiddle Encyclopedia.