Arisaema triphyllum (jack-in-the-pulpit, bog onion, brown dragon, Indian turnip,) is a herbaceous perennial plant growing from a corm. It is a highly variable species typically growing 30–65 centimetres (12–26 in) in height with three-parted leaves and flowers contained in a spadix that is covered by a hood. It is native to eastern North America, occurring in moist woodlands and thickets from Nova Scotia west to Minnesota, and south to southern Florida and Texas. 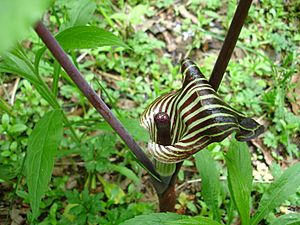 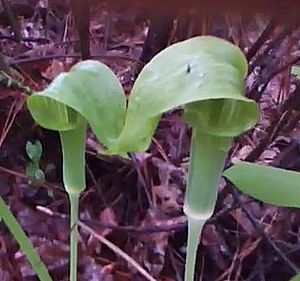 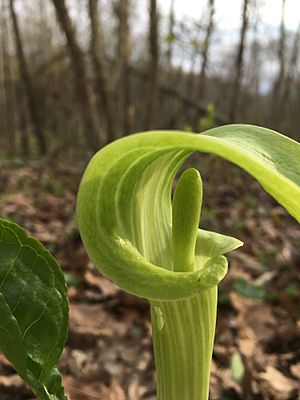 Closer view of Jack in the Pulpit flower, showing detail of spatha.

The leaves are trifoliate, with groups of three leaves growing together at the top of one long stem produced from a corm; each leaflet is 8–15 centimetres (3.1–5.9 in) long and 3–7 centimetres (1.2–2.8 in) broad. Plants are sometimes confused with Poison-ivy especially before the flowers appear or non-flowering plants.

The inflorescences are shaped irregularly and grow to a length of up to 8 cm. They are greenish-yellow or sometimes fully green with purple or brownish stripes. The spathe, known in this plant as "the pulpit" wraps around and covers over and contain a spadix ("Jack"), covered with tiny flowers of both sexes. The flowers are unisexual and sequential hermaphrodites, in small plants most if not all the flowers are male, as plants age and grow larger the spadix produces more female flowers. This species flowers from April to June. It is pollinated by fungus gnats, which it attracts by smell and are trapped by the flower. They manage to escape from the male inflorescences, but cannot do so when they fall inside a female inflorescence. Other insects are known to visit the flowers as well, such as gall gnats and beetles.

The fruits are smooth, shiny green, 1 cm wide berries clustered on the thickened spadix. The fruits ripen in late summer and fall, turning a bright red color before the plants go dormant. Each berry produces 1 to 5 seeds typically, the seeds are white to light tan in color, rounded, often with flattened edges and a short sharp point at the top and a rounded bottom surface. If the seeds are freed from the berry they will germinate the next spring, producing a plant with a single rounded leaf. Seedlings need three or more years of growth before they become large enough to flower.

It is hardy to USDA plant hardiness zone 3. 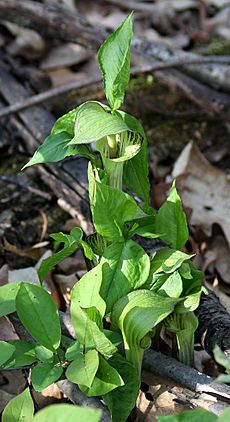 Plants in early spring before the leaves have fully unfolded

The plant contains calcium oxalate crystals as raphides in all parts, and because of this, consumption of the raw plant material results in a powerful burning sensation. It can cause irritation of the mouth and digestive system, and on rare occasions the swelling of the mouth and throat may be severe enough to affect breathing.

A preparation of the root was reported to have been used by Native Americans as a treatment for sore eyes. Preparations were also made to treat rheumatism, bronchitis, and snakebites, as well as to induce sterility.

One account from the Meskwaki people states that they would chop the herb's corm and mix it with meat and leave the meat out for their enemies to find. The taste of the oxalate would not be detectable because of the flavored meat, but consuming the meat reportedly caused their enemies pain and death. They have also reportedly used it to determine the fate of the sick by dropping a seed in a cup of stirred water; If the seed went around four times clockwise, the patient would recover, if it went around less than four times they would not.

The oxalic acid in jack-in-the-pulpit is poisonous if ingested. Care should also be taken to avoid confusion with poison ivy, which has three leaflets per leaf somewhat similar in appearance.

Arisaema triphyllum is generally considered to be a single species with three subspecies – the diploids A. t. stewardsonii and A. t. pusillum and the tetraploid A. t. triphyllum, which originated as a hybrid of the first two. However, the three are reproductively isolated in the wild, which would argue for treating them as species. The main reason for considering them subspecies seems to be the difficulty in distinguishing them, especially based on herbarium specimens.

Within the genus Arisaema, A. triphyllum is classified in the section Pedatisecta and is most closely related to Asian species such as A. amurense.

It is not a close relative to the other American Arisaema species (A. dracontium and A. macrospathum), which are in a different section of Arisaema.

All content from Kiddle encyclopedia articles (including the article images and facts) can be freely used under Attribution-ShareAlike license, unless stated otherwise. Cite this article:
Arisaema triphyllum Facts for Kids. Kiddle Encyclopedia.