Kids Encyclopedia Facts
This page is about the garden at Stanford University, California. For the former garden at Bisbee, Arizona, see Arizona Cactus Botanical Garden. 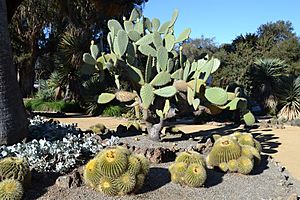 Another view of the garden

The Arizona Cactus Garden, or, officially, Arizona Garden (17,000 square feet or 0.16 hectares), also known as the Cactus Garden, is a botanical garden specializing in cactus and succulents. It is located on the campus of Stanford University (within the Stanford University Arboretum, and near the Stanford Family Mausoleum and the Angel of Grief), Stanford, California, USA, and open to the public daily without charge.

The garden was first planted between 1880 and 1883 for Jane and Leland Stanford to a design by landscape architect Rudolph Ulrich. It was planned to be adjacent to their new residence, and part of the larger gardens for the Stanford estate. However, the home was never built. The garden was regularly maintained until the 1920s after which it fell into great disrepair.

Volunteer restoration work began in 1997 and is ongoing. Notwithstanding decades of neglect, some of the original plants remain. The garden now contains approximately 500 cacti and succulents in 58 beds, broadly divided into two major sections. The Eastern Hemisphere section is planted with aloes, jade plants and other succulents from Europe, Asia, and Africa, and the Western Hemisphere section holds cacti native to the Americas. Historic plants, comprising some 10-15% of the plantings, have been left in their original locations. As of August 2016, the plants were not labeled.

All content from Kiddle encyclopedia articles (including the article images and facts) can be freely used under Attribution-ShareAlike license, unless stated otherwise. Cite this article:
Arizona Cactus Garden Facts for Kids. Kiddle Encyclopedia.