Arlee (Salish: nɫq̓alqʷ, nɫq̓a ) is an unincorporated community and census-designated place (CDP) in Lake County, Montana, United States. The population was 636 at the 2010 census. It is named after Alee, a Salish chief. The chief's name has no "r", as the Salish alphabet has no letter "r".

According to the United States Census Bureau, the CDP has a total area of 6.5 square miles (17 km2), all of it land.

There were 235 households, out of which 37.0% had children under the age of 18 living with them, 42.1% were married couples living together, 20.4% had a female householder with no husband present, and 31.1% were non-families. 26.8% of all households were made up of individuals, and 7.7% had someone living alone who was 65 years of age or older. The average household size was 2.56 and the average family size was 3.14. 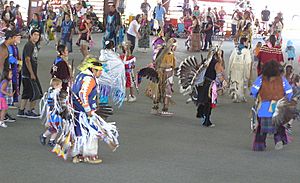 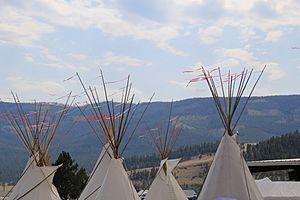 Arlee was named after the Salish leader Arlee. In October 1873, he moved a small group of his people from the Bitterroot Valley, which was designated a “conditional reservation” in the 1855 Hellgate Treaty, to the Jocko Agency (later Flathead Indian Agency) located a few miles south of the current town of Arlee. This forced move stemmed from the efforts of a congressional delegation led by future president James Garfield to negotiate Salish removal from the Bitterroot Valley. 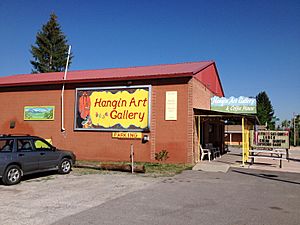 Salish is spoken in Arlee. Art is popular, and a gallery displays works by local artists.

Rodeo has been a huge part of arlees's culture. The annual faith of July. Rodeo is held during. Pow wow time and always has both. Native. And. Non native cowboys competing. Many Montana. Rodeo legends and long time. Contenders have lived. Here. Over. The years. Most. Notably the schall family. Whose faMiley members continue to rodeo to this day. Besides the schall family; the lytles, the mapstons, the matts and the hendricksons are all families who have produced good rodeo hands .

The Arlee Joint School District educates students from kindergarten through 12th grade. Arlee High School is a Class B school. They are known as the Warriors and Scarlets. Brothers on Three, a New York Times Bestselling book in 2021, is a non-fiction account of students from Arlee and their families.

All content from Kiddle encyclopedia articles (including the article images and facts) can be freely used under Attribution-ShareAlike license, unless stated otherwise. Cite this article:
Arlee, Montana Facts for Kids. Kiddle Encyclopedia.