The Flathead Indian Reservation, located in western Montana on the Flathead River, is home to the Bitterroot Salish, Kootenai, and Pend d'Oreilles tribes – also known as the Confederated Salish and Kootenai Tribes of the Flathead Nation. The reservation was created through the July 16, 1855, Treaty of Hellgate.

It has land in four of Montana's counties: Lake, Sanders, Missoula, and Flathead, and controls most of Flathead Lake. The Flathead Indian Reservation, west of the Continental Divide, consists of 1,938 square miles (5,020 km2) (1,317,000 acres (533,000 ha)) of forested mountains and valleys.

Native Americans have lived in Montana for more than 14,000 years, based on archaeological findings. The Bitterroot Salish came from the West Coast, whereas the Kootenai lived mostly in the interior of present-day Idaho, Montana, and Canada. The Kootenai left artifacts in prehistoric time. One group of the Kootenai in the northeast lived mainly on bison hunting. Another group lived on the rivers and lakes of the mountains in the west. When they moved east, they could rely less on salmon fishing, but turned to eating plants and bison. During the 18th century, the Salish and the Kootenai tribes shared gathering and hunting grounds. As European-American settlers entered the area, the different cultures of peoples came into conflict.

In 1855 the United States (US) made the Treaty of Hellgate, by which it set aside a reservation solely for use of the Flathead, encompassing an area including much of Flathead Lake. By the late 19th and early 20th century, the federal government had adopted a policy of allotting lands to individual Indian households from their communal holdings, in order to encourage subsistence farming and adoption of European-American ways. Such allotments took place in what became the state of Oklahoma, former Indian Territory, in order to extinguish Indian land claims.

Although the Flathead opposed such European-style allotments and farming, the US Congress passed the 1904 Flathead Allotment Act. After allotments of land to individual households of members on the tribal rolls, the government declared the rest of the communal land to be "surplus" and opened the reservation to homesteading by whites. United States Senator Joseph M. Dixon of Montana played a key role in getting this legislation passed. Its passage caused much resentment by the Flathead, and the allotment of reservation lands remains "a very sensitive issue". The Flathead still would like to regain control of their reservation lands.

The area was favorably compared to the Yakima River Valley in Washington State. Thousands of acres on the reservation were reserved for town sites, schools and the National Bison Range. The Flathead were given first choice of either 80 or 160 acres of land per household. The rest was made open to whites in 1910. A total of 81,363 applications by whites were received for 1,600 parcels of land. The applications were placed in plain brown envelopes, piled onto a pallet, and three young girls drew 6,000 of them, choosing who would have a chance to homestead on the land. The first 3,000 were notified in the spring and the second 3,000 were notified in the fall. But, lottery winners took only 600 tracts, leaving 1,000 tracts still open. These were taken in what the tribe considers a subsequent "land grab".

The distribution of their lands did not end the Native American problems with whites. According to their treaty, the tribes have the right to off-reservation hunting, but the state believed it could regulate those activities. State game wardens were responsible for a confrontation in 1908 with a small Pend d'Oreilles hunting party, which resulted in deaths of four of the Native Americans, in what is known as the Swan Valley Massacre. A court challenge to their hunting rights reached the US Supreme Court, which upheld tribal treaty rights to hunt off-reservation in their former territory. 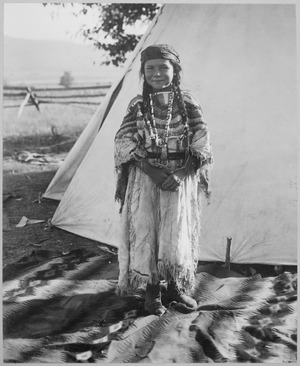 Angelic La Moose, 1913, on the Flathead Reservation, wearing traditional clothing made by her mother

The tribe prohibits hunting furbearing animals on the reservation. The tribe permits hunting by non-natives of the following birds: Hungarian partridge, pheasants, ducks, geese, mergansers, and coots. Other animals that can not be hunted by non-natives are: elk, white-tailed deer, mule deer, grizzly bear, and moose. Wolves, bison, swans, and falcons are also present.

The total population of the reservation was 28,324 as of the 2010 census, an 8% increase over the 2000 census. Some 9,138 persons living there identified as Native American; a total of 19,221 identified as other ethnicities, outnumbering tribal members by 2:1. The largest community on the reservation is the city of Polson, which is also the county seat of Lake County. The seat of government of the Confederated Salish and Kootenai Tribes of the Flathead Nation is Pablo. 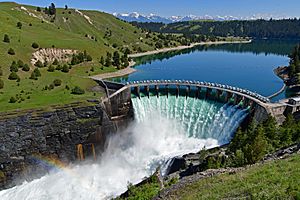 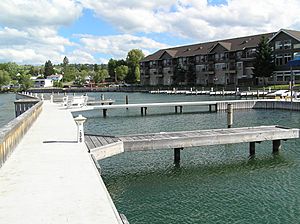 The tribes derive income from selling timber and from operating a variety of businesses:

In 2015, the tribes acquired the former Kerr Dam, renaming it as the Seli’š Ksanka Qlispe’ Dam. They are the first tribe to own a hydroelectric dam. It generates hydroelectric power for the region. They had previously worked with and shared revenues with the owner and operator of the dam, but decided to acquire it so they would have sole interest.

Salish Kootenai College, a tribally controlled college, has been established in Pablo. It offers two- and four-year degrees..

All content from Kiddle encyclopedia articles (including the article images and facts) can be freely used under Attribution-ShareAlike license, unless stated otherwise. Cite this article:
Flathead Indian Reservation Facts for Kids. Kiddle Encyclopedia.