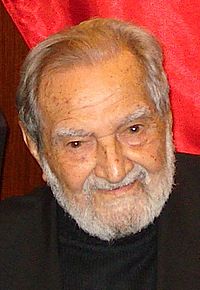 Armando Villanueva Del Campo (25 November 1915 – 14 April 2013) was a Peruvian politician. He was the leader of the Peruvian American Popular Revolutionary Alliance. Villanueva was born in Lima. He was the Prime Minister of Peru from 17 May 1988 through 15 May 1989 during Alan García's first presidency.

All content from Kiddle encyclopedia articles (including the article images and facts) can be freely used under Attribution-ShareAlike license, unless stated otherwise. Cite this article:
Armando Villanueva Facts for Kids. Kiddle Encyclopedia.