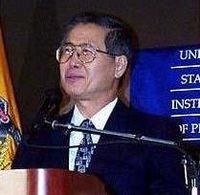 He is still remembered in Peru for defeating Shining Path, the peace with Ecuador and recovering the economy after the presidency of Alan García.

In 2001, Fujimori's head of intelligence, Vladimiro Montesinos, was accused of doing illegal things. People thought that Fujimori was also involved.

After that, Fujimori went to Japan, because he has Japanese ancestors, thus is a citizen there. Japan protected him from Peruvian law since they do not find any valid accusation. Fujimori resigned the Presidency of Peru. Valentín Paniagua was elected president by the Congress soon after Fujimori resigned.

In 2005 Fujimori was detained in Chile. After his extradition in 2007 the Peruvian government put him on trial and convicted him. He was sentenced to several years in prison. On 24 December 2017, President Kuczynski pardoned him on health grounds but in 2019 he was put back in prison.

His daughter, Keiko is also a politician and ran for president many times.

All content from Kiddle encyclopedia articles (including the article images and facts) can be freely used under Attribution-ShareAlike license, unless stated otherwise. Cite this article:
Alberto Fujimori Facts for Kids. Kiddle Encyclopedia.