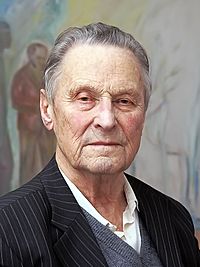 Arseny Mironov (25 December 1917 – 3 July 2019) was a Russian scientist, aerospace engineer and aviator. He was one of the oldest researchers in aircraft aerodynamics and flight testing. He was one of the Gromov Flight Research Institute directors (1981–1985). Mironov was the recipient of the Stalin Prize (1948) and USSR State Prize (1976), and an honourary citizen of Zhukovsky. He turned 100 in December 2017. Mironov was born in Vladimir, Bolshevik Russia.

All content from Kiddle encyclopedia articles (including the article images and facts) can be freely used under Attribution-ShareAlike license, unless stated otherwise. Cite this article:
Arseny Mironov Facts for Kids. Kiddle Encyclopedia.