Artillery of Japan facts for kids 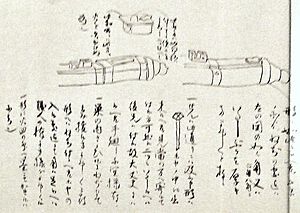 Description of the mechanism of a breech-loading swivel gun in Japanese. 16th century.

Artillery in Japan is recorded in the 13th century. It was not used widely before the Sengoku period in the 16th century.

In the 1840s, the Tokugawa Shogunate began to anticipate that either British or French military might attack Japan. Takashima Shuhan (1798-1866) submitted a petition to the shogun calling for the purchase of Western firearms. In 1841, a demonstration of Western gunnery made a strong impression. Powerful conservative factions in the shogunate resisted change.

During the 1864 Bombardment of Shimonoseki, European naval guns were shown to be superior to Japanese cannon on shore.

Following the Meiji Restoration, Japan would pursue a policy of "Rich country, strong army" (富国強兵), which led to a general rearmament.

Naval guns and field artillery were important in the Russo-Japanese War of 1905.

Before and during World War II, the Japanese Army deployed a variety of artillery pieces. 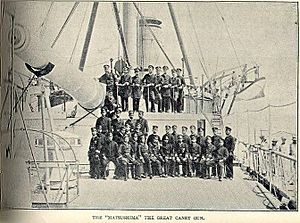 The French-built Matsushima, flagship of the Imperial Japanese Navy at the Battle of the Yalu River (1894), used a 320 mm (13 in) Canet gun.

The self-propelled artillery of the current Japanese military include

All content from Kiddle encyclopedia articles (including the article images and facts) can be freely used under Attribution-ShareAlike license, unless stated otherwise. Cite this article:
Artillery of Japan Facts for Kids. Kiddle Encyclopedia.