See bird's-nest fern for other plants with this common name.

Asplenium nidus is an epiphytic species of fern in the family Aspleniaceae, native to tropical southeastern Asia, eastern Australia, Hawaii, Polynesia, Christmas Island, India, and eastern Africa. It is known by the common names bird's-nest fern (a name shared by some other aspleniums) or simply nest fern.

Asplenium nidus forms large simple fronds visually similar to banana leaves, with the fronds growing to 50–150 centimetres (20–59 in) long and 10–20 centimetres (3.9–7.9 in) broad. They are light green, often crinkled, with a black midrib, and exhibit circinate vernation. Spores develop in sori on the underside of the fronds. These sori form long rows extending out from the midrib on the back of the outer part of the lamina (frond). The fronds roll back as they brown and create a massive leaf nest in the branches and trunks of trees.

A global phylogeny of Asplenium published in 2020 divided the genus into eleven clades, which were given informal names pending further taxonomic study. A. nidus belongs to the "Neottopteris clade", members of which generally have somewhat leathery leaf tissue. While the subclades of this group are poorly resolved, several of them share a characteristic "bird's-nest fern" morphology with entire leaves and fused veins near the margin. Both the 2020 study and a 2015 molecular study found that A. nidus is polyphyletic, meaning that some populations were not closely related to others—A. nidus from Madagascar, Vanuatu and New Guinea were more closely related to other species than each other. Hence a revision with sampling of the species across its range was required to delineate the taxon and identify cryptic species. A. nidus sensu lato forms a clade with the morphologically similar A. australasicum, but other bird's-nest ferns such as A. antiquum and A. phyllitidis form a separate subclade which is not particularly closely related. 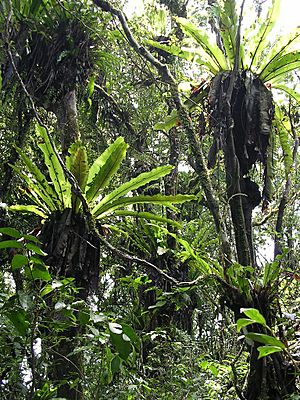 Asplenium nidus is native to east tropical Africa (in Tanzania, inclusive of the Zanzibar Archipelago); temperate and tropical Asia (in Indonesia; East Timor; the prefecture of Kyushu, and the Ryukyu Islands of Japan; Malaysia; the Philippines; Taiwan; and Thailand); and in Australasia (in the northern part of Queensland in Australia).

Asplenium nidus can survive either as an epiphyte or terrestrial plant, but typically grows on organic matter. This fern often lives in palm trees, where it collects water and humus in its leaf-rosette. It thrives in warm, humid areas in partial to full shade. It dislikes direct sunlight and likes to be in full shade on the north facing garden wall. 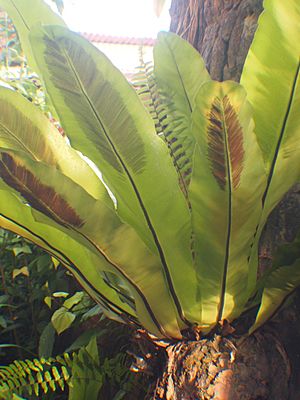 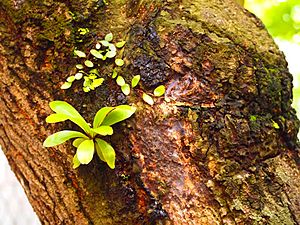 A small Asplenium nidus growing on a tree trunk

With a minimum temperature of 10 °C (50 °F), Asplenium nidus is widely cultivated in temperate regions as a houseplant. However, many plants sold in America as A. nidus are actually Asplenium australasicum, which has longer sori, and a differently shaped midrib. Asplenium nidus has gained the Royal Horticultural Society's Award of Garden Merit.

Asplenium nidus has been used locally in folk medicine for asthma, sores, weakness, and halitosis.

The sprouts of A. nidus are eaten as a vegetable in Taiwan where it is called 山蘇 (pronounced shān sũ) and typically cut into inch-long pieces and sautéed with garlic and chilli peppers.

In Hong Kong, this species is under protection based on Forestry Regulations Cap. 96A.

All content from Kiddle encyclopedia articles (including the article images and facts) can be freely used under Attribution-ShareAlike license, unless stated otherwise. Cite this article:
Asplenium nidus Facts for Kids. Kiddle Encyclopedia.