Astrophysics is the study of how stars and planets work, and how we can learn about them. Astrophysicists use physics to explain what astronomers find and see.

Astrophysics is also the study of how the Universe started and how it is changing with time. This part of astrophysics is called cosmology. 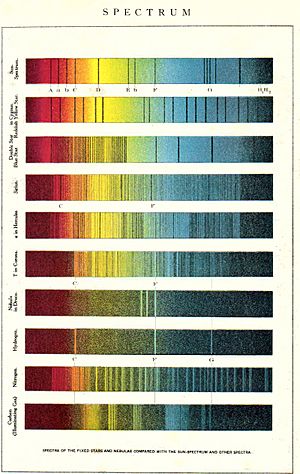 For a long time bodies in the sky seemed to be unchanging spheres moving in a circle. But on Earth growth and decay happened, and natural motion was in a straight line. Therefore, people thought the celestial region was made of a fundamentally different kind of matter from that found on Earth.

During the 16th and 17th century, natural philosophers such as Nicolaus Copernicus, Johannes Kepler, Galileo, Descartes, and Newton, began to maintain that the celestial and terrestrial regions were made of similar kinds of material and were subject to the same natural laws.

When they were able to work out how the planets moved, the science of astrophysics was born. Sir Isaac Newton realized that the same rules of mechanics that he had found on the surface of the Earth also could be used to predict how the planets moved. He said, "As above, so below." By this, he meant that we can study how things work on this planet to find out how things work in space.

Later scientists found that by looking at the light from stars, they were able to work out what they were made from. This process is called spectroscopy. 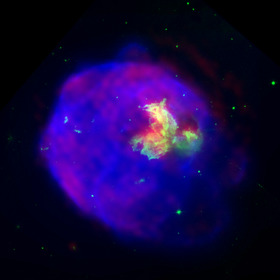 Supernova remnant LMC N 63A imaged in x-ray (blue), optical (green) and radio (red) wavelengths. The X-ray glow is from material heated to about ten million degrees Celsius by a shock wave generated by the supernova explosion.

There are two main types of astrophysics:

All content from Kiddle encyclopedia articles (including the article images and facts) can be freely used under Attribution-ShareAlike license, unless stated otherwise. Cite this article:
Astrophysics Facts for Kids. Kiddle Encyclopedia.