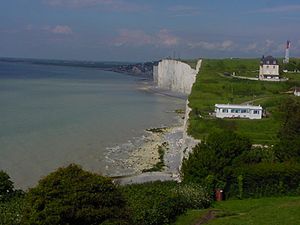 Ault is a commune. It is in the Hauts-de-France region in the Somme department in the north of France.

Ault is on the English Channel, 20 miles (32 km) west of Abbeville. It has chalk cliffs and a beach of pebbles and sand at low tide. South of the town is a large wooded valley, the ‘Bois de Cise. North of the town the cliffs become smaller, to the level of the beach at Onival. The area around the town, the 'hâble d’Ault' was mostly tidal marshland. This has been reclaimed from the sea and is used for farming cattle and sheep.

Ault had a station on the standard gauge Woincourt to Onival line. The line closed to passengers in May 1939, but was used during World War II to move materials for the Atlantic Wall. During the war, a metre gauge line was built at the side of the road from Lanchères, on the CFBS, to Ault. This line was removed after the war.

The sea is washing away the beach, cliffs and public spaces including car parks and gardens. To protect the coast, a "balcony on the sea", a huge concrete construction has been built, However, there are signs of wear on the dyke under the casino.

All content from Kiddle encyclopedia articles (including the article images and facts) can be freely used under Attribution-ShareAlike license, unless stated otherwise. Cite this article:
Ault Facts for Kids. Kiddle Encyclopedia.