Authors of the Bible facts for kids 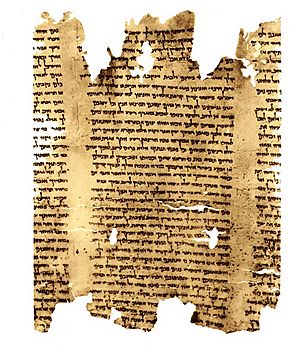 A fragment of the Book of Isaiah, found among the Dead Sea scrolls

The Bible is a collection of texts that are commonly referred to as books. Many of these books have the name of only one person. The text of many books was changed several times, sometimes over a period of several centuries. A well-known example of this fact is the Pauline epistles: Many of these letters were not written by Paul the Apostle, but by other people.

All content from Kiddle encyclopedia articles (including the article images and facts) can be freely used under Attribution-ShareAlike license, unless stated otherwise. Cite this article:
Authors of the Bible Facts for Kids. Kiddle Encyclopedia.