Avery Island (historically French: Île Petite Anse) is a salt dome best known as the source of Tabasco sauce. Located in Iberia Parish, Louisiana, United States, it is about three miles (5 km) inland from Vermilion Bay, which in turn opens onto the Gulf of Mexico. A small human population lives on the island. 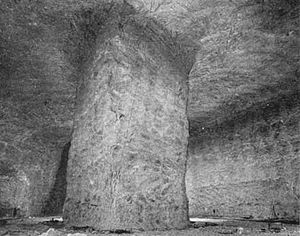 The island was named after the Avery family, who settled there in the 1830s, but long before that, Native Americans had found that Avery Island’s verdant flora covered a precious natural resource—a massive salt dome. There, the Indians boiled the Island’s briny spring water to extract salt, which they traded to other tribes as far away as central Texas, Arkansas, and Ohio.

According to records maintained prior to 1999 in the Southern Historical Collection at the University of North Carolina at Chapel Hill, Petite Anse Island, renamed Avery Island in the late 19th century, was purchased by John Craig Marsh of New Jersey in 1818. Marsh operated a sugar plantation on the island's fertile soil. His daughter, Sarah Craig Marsh, married Daniel Dudley Avery in 1837, thus uniting the Marsh and Avery families. Daniel Dudley Avery hailed from Baton Rouge, and was a jurist. In 1849, Daniel became co-owner of his in-law's sugar plantation, and in 1855 he became sole owner.

During the American Civil War, a mine of pure rock salt was founded on Avery Island in May 1861, which subsequently produced more than 22 million pounds (10,000 metric tons) of salt for the Confederacy. According to the historian John D. Winters in his The Civil War in Louisiana (1963), the rock salt mine had been well-protected, until Union General Nathaniel P. Banks began a push up Bayou Teche. After an all-night march, Union Colonel W.K. Kimball, in Winters' words, "advanced to the beautiful little island and, without opposition, burned eighteen buildings, smashed the steam engines and mining equipment, scattered six hundred barrels of salt awaiting shipping, and brought away a ton of gunpowder left behind by [Confederate General] Taylor's men.

In 1938, E.A. McIlhenny established a nutria farm on Avery Island, Louisiana, within shouting distance of the factory where the company that bears his family name makes Tabasco sauce. According to company history, McIlhenny bought his stock of nutrias from a farm in New Orleans, so he was not the first to introduce the creature, a native of southern Brazil, Argentina, and Chile, to North America. That dubious honor belongs to another. What is certain, though, is that McIlhenny, for reasons unknown, released an unknown but probably large number of nutrias into the wild from the confines of Avery Island, and from there they fanned out and proliferated.

By 1941, nutria had spread throughout the state and as far west as Port Arthur, Texas. In the next two decades they spread only a little farther down the Texas Gulf Coast, growing not in range but markedly in number, so much so that nutria were blamed for devastating sugarcane and rice harvests for several years running. The blame seems fairly assigned, for nutria, as the biological term has it, are “opportunistic feeders,” and they eat a quarter of their body weight daily, for an average of about five pounds of vegetation per animal—and rice and sugarcane are fair game in the nutria larder.

In 1958, the federal government instituted wildlife control programs in an effort to curb the spread and absolute number, estimated at more than 20 million, of nutria. Resistance to those programs was widespread in the region, though, since thousands of Texans and Louisianans were making their living harvesting nutria for their fur and, to a lesser extent, their meat.

The international fur market collapsed in the 1980s, and thereafter few people tried to earn their living from nutria trapping. The nutria population swelled again, and now it began to spread. A quarter-century later, nutria are now found in Canada and 16 American states, with the heaviest concentrations remaining in and around the Gulf Coast, but in significant numbers as far afield as coastal Maryland and Virginia. As their range and number have increased, nutria have crowded the native muskrat out of much of its former territory, and as of 1999 the animal has formally been considered an invasive species.

Avery Island was hit hard in September 2005 by Hurricane Rita. According to The New York Times, the family spent $5 million on constructing a 17-foot (5.2 m)-high levee, pumps, and back-up generators to ensure that future hurricanes will not disrupt Tabasco sauce production.

Under the Avery/McIlhenny family's management, Avery Island has remained a natural paradise, inhabited by many animal species, as well as by exotic plants from throughout the world. Edward Avery McIlhenny, or "Mr. Ned" as he was affectionately known, founded this bird colony—later called Bird City—around 1895 after plume hunters had slaughtered egrets by the thousands to provide feathers for ladies' hats. Edward gathered eight young egrets, raised them in captivity on the Island, and released them in the fall to migrate across the Gulf of Mexico. The following spring the birds returned to the Island with others of their species, a migration that continues today.

Edward McIlhenny introduced numerous varieties of azaleas, Japanese camellias, Egyptian papyrus sedge, and other rare plants to the Island's natural landscape. When oil was discovered on the Island in 1942, he ensured that production crews bypassed live oak trees and buried pipelines (or painted them green) to preserve the Island's beauty, wildlife, and utility as a wildlife refuge.

Today Jungle Gardens and Bird City are open to the public.

Avery Island is surrounded on all sides by bayous (slow-moving, muddy rivers), salt marsh, and swampland; it sits about 130 miles (225 km) west of New Orleans. The island was a sugar plantation formerly known as Petite Anse Island. (Petite Anse means "Little Cove" in Cajun French.) Access to the island is via toll road (technically, a very low toll bridge, which charges only on inbound traffic).

Avery Island is actually a huge dome of rock salt, three miles (5 km) long and two and a half miles (4 km) wide. It was created by the upwelling of ancient evaporite (salt) deposits that exist beneath the Mississippi River Delta region. These upwellings are known as "salt domes." Avery Island is one of five salt dome islands that rise above the flat Louisiana Gulf coast.

All content from Kiddle encyclopedia articles (including the article images and facts) can be freely used under Attribution-ShareAlike license, unless stated otherwise. Cite this article:
Avery Island, Louisiana Facts for Kids. Kiddle Encyclopedia.