Avimimus (meaning "bird mimic") was a recently discovered maniraptoran. It was a very fast moving, light-weight, bird-like theropod dinosaur that lived in the late Cretaceous in what is now Mongolia, around 70 million years ago. that may have had feathers. 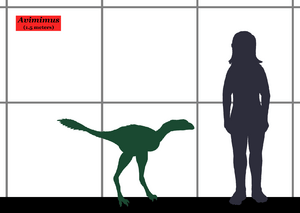 Size of A. portentosus compared to a human

Avimimus was a small, bird-like dinosaur with a length of 1.5 m (5 ft). The skull was small compared to the body, though the brain and eyes were large. The size of the bones which surrounded the brain and were dedicated to protecting it are large. This is also consistent with the hypothesis that Avimimus had a proportionally large brain.

The jaws of Avimimus were thought to form a parrot-like beak lacking teeth, and a thorough review of the holotype specimen's anatomy confirmed that no teeth were preserved, although a series of tooth-like projections along the tip of the premaxilla were. However, subsequently discovered specimens have been reported to preserve small premaxillary teeth. The small teeth or possible lack thereof in Avimimus suggests that it may have been an herbivore or omnivore. Kurzanov himself, however, believed that Avimimus was an insectivore.

The foramen magnum, the hole allowing the spinal cord to connect with the brain, was proportionally large in Avimimus. The occipital condyle, however, was small, further suggestive of the skull's relative lightness. The neck itself was long and slender, and is composed of vertebrae that are much more elongate than in other oviraptorosaurs. Unlike oviraptorids and caenagnathids, the back vertebrae lack openings for air sacs, suggesting that Avimimus is more primitive than these animals. 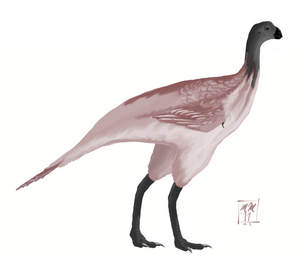 The forelimbs were relatively short. The bones of the hand were fused together, as in modern birds, and a ridge on the ulna (lower arm bone) was interpreted as an attachment point for feathers by Kurzanov. Kurzanov, in 1987, also reported the presence of quill knobs, and while Chiappe confirmed the presence of bumps on the ulna, their function remained unclear. Kurzanov was so convinced they were attachment points for feathers that he concluded that Avimimus may have been capable of weak flight. The presence of feathers is now widely accepted, but most paleontologists do not believe Avimimus could fly.

The ilium was almost horizontally oriented, resulting in exceptionally broad hips. Little is known of the tail but the hip suggests that the tail was long. The legs were extremely long and slender, suggesting that Avimimus was a highly specialized runner. The proportions of the leg bones add further weight to the idea of Avimimus was quick on its feet. The animal's shins were long in comparison with its thighs, a trait common among cursorial animals. It also had three-toed feet with narrow pointed claws.

All content from Kiddle encyclopedia articles (including the article images and facts) can be freely used under Attribution-ShareAlike license, unless stated otherwise. Cite this article:
Avimimus Facts for Kids. Kiddle Encyclopedia.