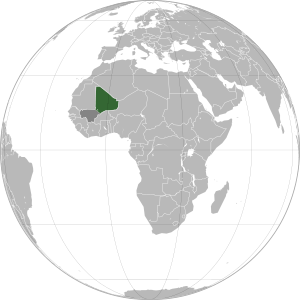 Azawad, i Africa, in green. The rest of Mali is shown in dark grey. 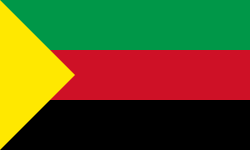 The flag of Azawad

Azawad is the name for the northern part of Mali. The name translates to Savannah. The region is mostly desert-like. Between 2012 and 2013 it was independent from Mali. It is split into the regions Timbuktu, Gao, and Kidal. The territorry has a size of about 882,000 square kilometres (341,000 sq mi). The biggest cities are Gao with about 87.000 people, and Timbuktu with about 55.000.

All content from Kiddle encyclopedia articles (including the article images and facts) can be freely used under Attribution-ShareAlike license, unless stated otherwise. Cite this article:
Azawad Facts for Kids. Kiddle Encyclopedia.