Babes in Toyland is a Laurel and Hardy musical Christmas film released on November 30, 1934. The film is also known by the alternative titles Laurel and Hardy in Toyland, Revenge Is Sweet (the 1948 European reissue title), and March of the Wooden Soldiers (in the United States), a 73-minute abridged version.

Based on Victor Herbert's popular 1903 operetta Babes in Toyland, the film was produced by Hal Roach, directed by Gus Meins and Charles Rogers, and distributed by Metro-Goldwyn-Mayer. The film was originally printed in Sepiatone, but there are two computer-colorized versions.

Although the 1934 film makes use of many of the characters in the original play, as well as several of the songs, the plot is almost completely unlike that of the original stage production. In contrast to the stage version, the film's story takes place entirely in Toyland, which is inhabited by Mother Goose (Virginia Karns) and other well-known fairy tale characters. 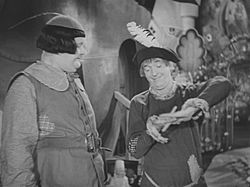 Stannie Dum (Stan Laurel) and Ollie Dee (Oliver Hardy) live in a shoe (as in the nursery rhyme There Was An Old Woman Who Lived In A Shoe), along with Mother Peep (the Old Woman), Bo Peep (Charlotte Henry), a mouse resembling Mickey Mouse (and actually played by a live monkey in a costume), and many other children. The mortgage on the shoe is owned by the villainous Silas Barnaby (Henry Brandon as a character based on the English nursery rhyme "There Was A Crooked Man"), who is looking to marry Bo-Peep. Knowing the Widow Peep is having a difficult time paying the mortgage, Barnaby offers the old woman an ultimatum – unless Bo Peep agrees to marry him he will foreclose on the shoe. Widow Peep refuses, but is worried about where she'll get the money to pay the mortgage. Ollie offers her all the money he has stored away in his savings can, only to learn that Stannie has taken it to buy peewees (a favored toy consisting of a wooden peg with tapered ends that rises in the air when struck with a stick near one end and is then caused to fly through the air by being struck again with the stick). He and Stannie set out to get the money for the mortgage from their boss, the Toymaker (William Burress). But Stannie has mixed up an order from Santa Claus (building 100 wooden soldiers at six feet tall, instead of 600 soldiers at one foot tall) and one of the soldiers, when activated, wrecks the toy shop. Stannie and Ollie are fired without getting the money.

The two then hatch a plan to sneak into Barnaby's house and steal the mortgage but are again foiled by their incompetence. Barnaby has them arrested on a burglary charge, and the two are sentenced to be dunked in the ducking stool and then banished to Bogeyland. But Barnaby agrees to drop the charges if Bo Peep will marry him. She reluctantly agrees, but not before Ollie suffers the dunking.

Stannie and Ollie come up with a new scheme. At the wedding, Ollie is present to give the bride away. After the nuptials, but before the ceremonial kiss, Ollie asks for the "wedding present" (the mortgage) from Barnaby. After inspecting it, Ollie tears it up, and then lifts the bride's veil — to reveal Stannie, who had worn Bo Peep's wedding dress to the ceremony. Bo Peep is still free of Barnaby, and the mortgage is destroyed. Ollie teases Stan about having to live with Barnaby as Stan cries saying "I don't LOVE him".

Enraged, Barnaby plots his revenge, eventually hitting on the idea of framing Bo Peep's true love, Tom-Tom (Felix Knight), on a trumped-up charge of "pignapping", and getting him banished to Bogeyland. Barnaby proceeds to abduct Little Elmer (Angelo Rossitto), one of the Three Little Pigs, and then has a henchman plant false evidence (including sausage links) in Tom-Tom's house. Tom-Tom is put on trial, convicted, and banished to the abode of the "bogeymen," Bogeyland, which he is taken to on a raft by two dunkers across an alligator-infested river. Those banished to Bogeyland never return; they are inevitably eaten alive by the bogeymen. A distraught but brave Bo Peep follows Tom-Tom through the dark, cavernous place where twisted cypress trees grow, and many stalactites and stalagmites protrude from its rocky landscape.

Meanwhile, Ollie and Stannie find evidence implicating Barnaby in the pignapping, including the fact that the alleged sausage links presented as evidence at Tom-Tom's trial are made of beef. They later find the kidnapped pig alive in Barnaby's cellar.

A manhunt commences for Barnaby, who flees to Bogeyland through a secret passageway at the bottom of an empty well. Stannie and Ollie eventually follow Barnaby down the well. Meanwhile, Bo Peep crosses the river to Bogeyland, finds Tom-Tom and explains Barnaby's trickery to him. 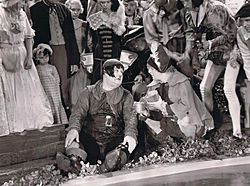 Tom-Tom sings Victor Herbert's Go to Sleep, Slumber Deep to Bo-Peep in an enormous cave set with giant spider webs. Barnaby catches up to Tom-Tom and Bo-Peep, and attempts to abduct Bo-Peep but gets into a fight with Tom-Tom, who gives Barnaby a well-deserved thrashing. An enraged Barnaby grabs a large stick and beats a stalactite to summon an army of Bogeymen, who chase Bo-Peep and Tom-Tom through the caverns of Bogeyland. The lovers run into Stannie and Ollie, who help them escape back through the well and are welcomed by the townspeople, who now realize Barnaby's treachery. Barnaby leads an invasion of Toyland on a fleet of rafts in a scene reminiscent of the painting of Washington Crossing the Delaware.

Ollie and Stan tell their story to Old King Cole (Kewpie Morgan), the King of Toyland, and the townspeople as two Bogeymen scale the wall and open the gate. The crowd flees in panic as the army of torch-wielding Bogeymen attacks Toyland. Ollie and Stannie run and hide in the toy shop warehouse. There they discover boxes of darts and use them to fight off the Bogeymen, thanks to Stan's skill with the game of "peewees" (and help from the three little pigs and the mouse). Stan and Ollie then empty an entire box of darts into a cannon, but as the two search for the last remaining darts, they realize instead that they should activate the wooden soldiers. The "march" alluded to in the film's title begins as the soldiers march out of the toy shop (filmed in a stop-motion animation sequence by Roy Seawright). The scene changes to live-action as the soldiers attack the Bogeymen with the bayonets of their rifles. Barnaby is defeated and trapped and covered by blocks that spell "rat", while the Bogeymen are routed and driven back into Bogeyland, where alligators appear to feast on them, although this is never made clear. With the kingdom of Toyland saved, Stan and Ollie decide to give the Bogeymen a parting shot with the dart-filled cannon. But as Stan aims the cannon and lights the fuse, and Ollie turns away to avoid the loud blast, the barrel of the cannon flips backward and unleashes the barrage of darts on Ollie, covering his back with darts. The film ends with Stan pulling them out one by one as Ollie winces.

The film features only six musical numbers from the enormous stage score, though that is fitting for a musical with only a 78-minute running time. Included in the film, in the order in which they are performed, are: "Toyland" (opening), "Never Mind Bo-Peep", "Castle in Spain", "Go to Sleep (Slumber Deep)", and "March of the Toys" (an instrumental piece).

Also included in the film is an instrumental version of "I Can't do the Sum" for the running theme of Laurel and Hardy's scenes. Another song, "Who's Afraid of the Big Bad Wolf?", is not one of the original stage songs but appears in the Three Little Pigs segment, heard only as an instrumental piece.

The opening song is performed by Mother Goose and an offscreen chorus; most of the others are sung by Bo Peep and/or Tom-Tom. While none of the songs is performed by Laurel and Hardy, the two briefly dance and march in a memorable scene to "March of the Toys". 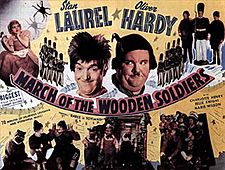 The original 79-minute film is under copyright to Prime TV Inc., the assets of which as of 2020 are owned by Nexstar Media Group, with Metro-Goldwyn-Mayer Studios (under Orion Pictures) still handling partial distribution rights of the film.

All content from Kiddle encyclopedia articles (including the article images and facts) can be freely used under Attribution-ShareAlike license, unless stated otherwise. Cite this article:
Babes in Toyland (1934 film) Facts for Kids. Kiddle Encyclopedia.