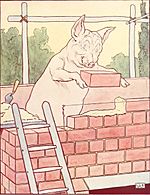 The third pig built his house of brick

"The Three Little Pigs" is a fable/fairy tale featuring three pigs. They each build houses of different materials. A big bad wolf (the villain or bad guy) is able to blow down the first two pigs' houses. The first is made of straw, the second is made of wood. But he is unable to destroy the third pig's house. This is because it is made of bricks. The moral or lesson of the story is to plan ahead. Printed versions of the story date back to the 1840s. But the story may have borrowed parts from older stories. One is The Wolf and the Seven Young Kids (German: Der Wolf und die sieben jungen Geißlein). This is a German folktale collected as the fifth tale in Grimms' Fairy Tales in 1812. The phrases used in the story, and the various morals that can be drawn from it, have become a part of Western culture.

Walt Disney made an animated version of the story. It features the song, "Who's Afraid of the Big Bad Wolf?"

All content from Kiddle encyclopedia articles (including the article images and facts) can be freely used under Attribution-ShareAlike license, unless stated otherwise. Cite this article:
The Three Little Pigs Facts for Kids. Kiddle Encyclopedia.