Bailey Ruin is an archaeological site located in Navajo County, Arizona, United States. The site, also known as "Stott Ranch Ruin" and "Pope Ranch Site," was added to the National Register of Historic Places on March 17, 2006 for its historical and archaeological significance.

Bailey Ruin, a well-preserved Ancient Puebloan site, was occupied from about AD 1275 to 1325, in the late Pueblo III Era to early Pueblo IV Era. 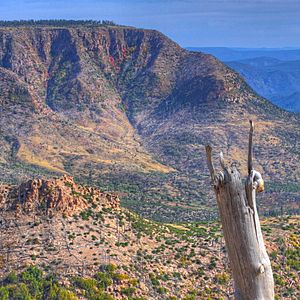 The Bailey Ruins are located mainly in a ponderosa forest in the Apache-Sitgreaves National Forests and partly on a private ranch, about 1.6 miles (2.6 km) from the Mogollon Rim at 6,808 feet (2,075 m) in elevation.

The site was a multi-storied complex of 200 to 250 rooms that appeared to grow gradually in size from AD 1275 to 1325. Around the turn of the 14th century, the plaza was enclosed by the addition of clusters of rooms. The site had several water sources: a cienega about 660 feet (200 m) from the pueblo and nearby springs. Currently there are shallow historic wells.

Archaeological interest in the site began before the turn of the 20th century.

All content from Kiddle encyclopedia articles (including the article images and facts) can be freely used under Attribution-ShareAlike license, unless stated otherwise. Cite this article:
Bailey Ruin Facts for Kids. Kiddle Encyclopedia.