Baird's sandpiper (Calidris bairdii) is a small shorebird. It is among those calidrids which were formerly included in the genus Erolia, which was subsumed into the genus Calidris in 1973. The genus name is from Ancient Greek kalidris or skalidris, a term used by Aristotle for some grey-coloured waterside birds. The English name and specific bairdii commemorate Spencer Fullerton Baird, 19th-century naturalist and assistant secretary of the Smithsonian Institution.

Adults have black legs and a short, straight, thin dark bill. They are dark brown on top and mainly white underneath with a black patch on the rump. The head and breast are light brown with dark streaks. In winter plumage, this species is paler brownish gray above. This bird can be difficult to distinguish from other similar tiny shorebirds; these are known collectively as "peeps" or "stints".

One of the best identification features is the long wings, which extend beyond the tail when the bird is on the ground. Only the white-rumped sandpiper also shows this, and that bird can be distinguished by its namesake feature. 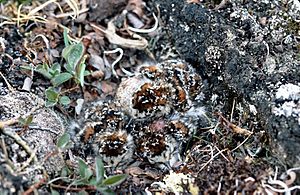 Chicks on the ground, camouflaged 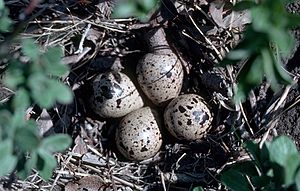 Baird's sandpipers breed in the northern tundra from eastern Siberia to western Greenland. They nest on the ground, usually in dry locations with low vegetation.

They are a long-distance migrant, wintering in South America. This species is a rare vagrant to western Europe.

Baird's sandpiper might have hybridized with the buff-breasted sandpiper.

These birds forage by moving about mudflats, picking up food by sight. They mainly eat insects, also some small crustaceans.

All content from Kiddle encyclopedia articles (including the article images and facts) can be freely used under Attribution-ShareAlike license, unless stated otherwise. Cite this article:
Baird's sandpiper Facts for Kids. Kiddle Encyclopedia.