Ballarat is an unincorporated community in Inyo County, California. It lies at an elevation of 1079 feet (329 m).

Today, Ballarat is a virtual ghost town. It was founded in 1896 as a supply point for the mines in the canyons of the Panamint Range. A quarter-mile to the south is Post Office Springs, a reliable water source used since the 1850s by prospectors and desert wanderers. George Riggins, a young immigrant from Australia, gave Ballarat its name when he proposed it should be named for Ballarat, Victoria, in the heart of Australia's gold country.

The town was founded in 1897. In its heyday—from 1897 to 1905—Ballarat had 400 to 500 residents. It hosted seven saloons, three hotels, a Wells Fargo station, post office (that opened in 1897), school, a jail and morgue, but no churches. Ballarat was a place for miners and prospectors in the area to resupply and relax.

The town began its decline when the Ratcliff Mine, in Pleasant Canyon east of town, suspended operations. Other mines nearby also began to play out, and in 1917 the post office closed and all that remained were a few diehard prospectors and desert rats.

In the 1960s, Charles Manson and the "Manson Family" of killers moved into a ranch south of Ballarat, and left graffiti in the town. The 1969 movie Easy Rider has a scene filmed in Ballarat; after arriving in the town, Peter Fonda's character, Wyatt, removes his Rolex watch and throws it away before he and Dennis Hopper's character, Billy, head east on their motorcycles towards New Orleans.

On Easter weekend, 1971, about two thousand people attended a "hippy" celebration at Ballarat. About two hundred contracted hepatitis (A) from contaminated drinking water. 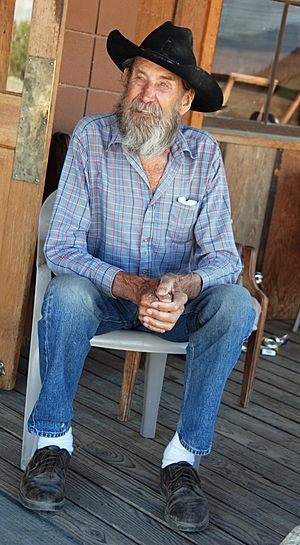 Today, Ballarat has one full-time resident. As of June 2013 Rocky Novak and his dogs, Potlicker and Brownie, live in the town. Rocky runs the general store on afternoons and weekends to supply tourists, and is working on repairing the water pipes that supply the town, for which he is paid by the government. Every summer, a woman named June and her son move into the former jailhouse/morgue.

Ballarat is used as a meeting point for four-wheel-drive expeditions into the Panamint Range and Death Valley, and in winter up to 300 people camp in the grounds of the town. The town was recently used as a set to tell the story of the Ballarat Bandit.

Ballarat was featured in:

Ballarat has featured in Western fiction including Hellbound for Ballarat (1970) by Nelson C. Nye and Bounty Hunt at Ballarat (1973) by Clayton Matthews.

All content from Kiddle encyclopedia articles (including the article images and facts) can be freely used under Attribution-ShareAlike license, unless stated otherwise. Cite this article:
Ballarat, California Facts for Kids. Kiddle Encyclopedia.