The banana pepper (also known as the yellow wax pepper or banana chili) is a medium-sized member of the chili pepper family that has a mild, tangy taste. While typically bright yellow, it is possible for them to change to green, red, or orange as they ripen. It is often pickled, stuffed or used as a raw ingredient in foods. It is a cultivar of the species Capsicum annuum. Its flavor is not very hot (0–500 Scoville units) and, as is the case with most peppers, its heat depends on the maturity of the pepper, with the ripest being sweeter than younger ones. 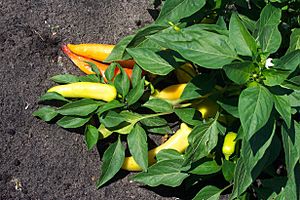 A mature fruit will be about 2–3 inches (5–8 cm) in length and have a curved shape and yellowish color similar to a banana, giving rise to the fruit's common name. Friggitelli (pepperoncini) are often erroneously referred to as banana peppers. The hot varieties of banana pepper are called Hungarian wax peppers.

The plant requires full sun, like other Capsicum annuum varieties, and should be treated the same as most other plants in the pepper family. Plants can be grown from seed and cuttings. A mature plant will reach 1 to 2 feet tall and can be grown in many climates, but prefer warmer climates. Cultivars include Early Sweet Banana, Hungarian Yellow Wax, Long Sweet Yellow, Sweet Banana, and Sweet Hungarian.

Raw banana peppers contain 92% water, 5% carbohydrates, and negligible fat and protein (table). They are rich sources of vitamin C, containing 100% of the Daily Value (DV) in a 100 gram reference amount (table). Vitamin B6 is present in substantial content of 28% DV, with no other micronutrients in appreciable amounts (table).

All content from Kiddle encyclopedia articles (including the article images and facts) can be freely used under Attribution-ShareAlike license, unless stated otherwise. Cite this article:
Banana pepper Facts for Kids. Kiddle Encyclopedia.