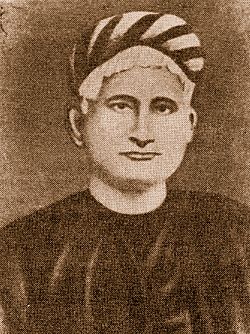 Rishi Bankim Chandra Chattopadhyay (27 June 1838 – 8 April 1894) was a Bengali writer, poet and journalist. He was the composer of India's national song Vande Mataram. It was originally a Bengali and Sanskrit stotra (hymn) portraying India as a mother goddess. The song inspired the activists during the Indian Independence Movement. Chattopadhyay wrote 13 novels. He also wrote several 'serious, serio-comic, satirical, scientific and critical articles in Bengali. His works were widely translated into other regional languages of India. Chattopadhyay was born to an orthodox Brahmin family. He was educated at Hooghly Mohsin College. The college was founded by Bengali philanthropist Muhammad Mohsin and Presidency College, Calcutta. He was one of the first graduates of the University of Calcutta. From 1858, until his retirement in 1891, he served as a deputy magistrate and deputy collector in the government of British India.

All content from Kiddle encyclopedia articles (including the article images and facts) can be freely used under Attribution-ShareAlike license, unless stated otherwise. Cite this article:
Bankim Chandra Chattopadhyay Facts for Kids. Kiddle Encyclopedia.