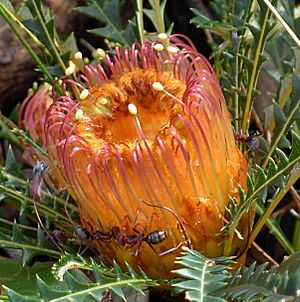 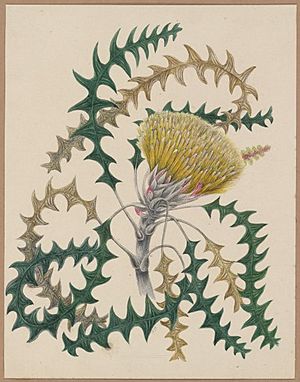 Banksia dallanneyi, commonly known as couch honeypot, is a species of prostrate shrub that is endemic to Western Australia. It only has a short above-ground stem, pinnatipartite or pinnatisect leaves, between thirty and seventy variously coloured flowers and glabrous, egg-shaped fruit.

Couch honeypot was first formally described in 1845 by Carl Meissner who gave it the name Dryandra lindleyana and published the description in Lehmann's Plantae Preissianae.

In 2007, Austin Mast and Kevin Thiele transferred all Dryandra species to Banksia. As there was already a species named Banksia lindleyana (porcupine banksia), Mast and Thiele changed the specific epithet to "dallanneyi", an anagram of "lindleyana".

The changed names of the subspecies and varieties are as follows and are accepted at the Australian Plant Census:

Banksia dallanneyi grows on flats and rises in a range of soil types between Geraldton and Albany.

All content from Kiddle encyclopedia articles (including the article images and facts) can be freely used under Attribution-ShareAlike license, unless stated otherwise. Cite this article:
Banksia dallanneyi Facts for Kids. Kiddle Encyclopedia.