Kids Encyclopedia Facts
Not to be confused with Meadowbank, another suburb of Sydney. 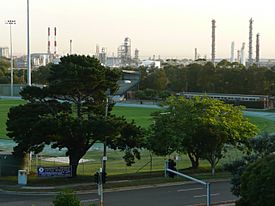 Looking across Banksmeadow from Eastgardens Shopping Centre, with Botany Athletic Centre in the foreground

Banksmeadow is a suburb of Sydney, in the state of New South Wales, Australia. Banksmeadow is located 11 kilometres south of the Sydney central business district, in the local government area of the Bayside Council. Banksmeadow sits on the northern shore of Botany Bay.

Banksmeadow is named in honour of naturalist Sir Joseph Banks, who travelled to Australia with Captain James Cook in 1770. Botany Bay is where they first landed ashore on 29 April 1770, when navigating around Australia on the Endeavour.

Foreshore Beach (also known as Botany Beach) runs along the shore of Botany Bay. Part of the sandy public beach has been lost in recent years due to the expansion of port facilities by The Sydney Ports Corporation. A rock seawall along a large part of the beach has greatly restricted its use as a public beach. Water quality is poor and the beach is subject to major erosion. Sydney Ports are constructing two groynes to protect what remains of the beach. The area includes Banksmeadow Park and Botany Golf Course.

Climate is characterized by relatively high temperatures and evenly distributed precipitation throughout the year. Summers are usually somewhat wetter than winters, with much of the rainfall coming from convectional thunderstorm activity. The Köppen Climate Classification subtype for this climate is "Cfa" (Humid Subtropical Climate).

All content from Kiddle encyclopedia articles (including the article images and facts) can be freely used under Attribution-ShareAlike license, unless stated otherwise. Cite this article:
Banksmeadow Facts for Kids. Kiddle Encyclopedia.