Kids Encyclopedia Facts
Not to be confused with Banner Mountain.

Banner Peak is the second tallest peak in the Ritter Range of California's Sierra Nevada. The mountain is 12,942 feet (3,945 m) tall, and there are several glaciers on its slopes. It lies within the boundaries of the Ansel Adams Wilderness; at the foot of the peak lie Garnet Lake, Lake Ediza, and the famous Thousand Island Lake. Banner Peak is near the town of Mammoth Lakes; from there, climbers can hike to the foot of the mountain where various routes reach the summit, the easiest of which is a class 2 from the west end of Thousand Island Lake and then the saddle between Banner Peak and the slightly taller Mount Ritter. Other nearby lakes include Lake Catherine and Shadow Lake.

The peak was named in 1883 by USGS topographer Willard D. Johnson who observed a banner cloud streaming from the summit. 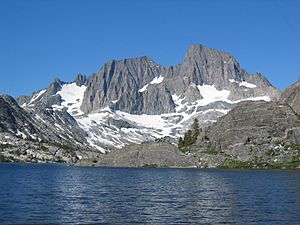 All content from Kiddle encyclopedia articles (including the article images and facts) can be freely used under Attribution-ShareAlike license, unless stated otherwise. Cite this article:
Banner Peak Facts for Kids. Kiddle Encyclopedia.