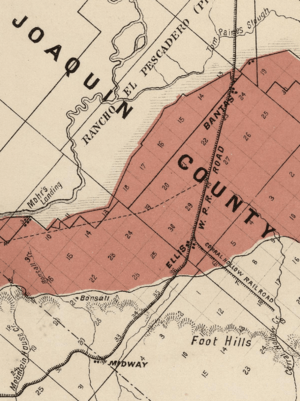 An 1877 map showing the towns of Bantas and Ellis

Banta is a small unincorporated community in San Joaquin County, California. Originally known as the village of San Joaquin Valley in the 1840s, the town was served by the McCloud Stage Company as the last stop for passengers before heading over the Altamont Pass on the road between Stockton and the Bay Area.

The stage stop spawned the Elk Horn Inn, which served thirsty travelers and local farmers. Expanded by owner Ransom Chamberlain in 1853 to include a two-story hotel, restaurant and bar, the inn was renamed “The White House.” In 1863, Henry Banta bought the inn from Chamberlain and changed the sign on the awning to read “Banta’s White House.” Soon, local residents, travelers and teamsters began calling the settlement “Bantas,” and the town began appearing on maps and stagecoach schedules under that name.

Banta was located on the route of the transcontinental railroad from Sacramento to the San Francisco Bay Area by way of the Altamont Pass and Niles Canyon before the Central Pacific bought the route of the California Pacific which ran north of the Carquinez Strait to Vallejo. In the late 1870s, the Central Pacific diverted the California Pacific line to Benicia, California and established a railroad ferry between Benicia and Port Costa across the Carquinez Strait. 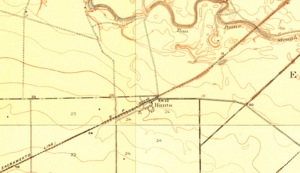 Meanwhile, the railroad chose to extend a branch line – the San Pablo and Tulare Extension Railroad – from Benicia and Port Costa to Tracy Junction instead of Banta in 1878, a decision which led to the creation of the current city of Tracy and relegated Banta to secondary status as a village at the far eastern edge of the railroad's yards. The San Pablo and Tulare extension was later incorporated into the Southern Pacific.

Banta's original Southern Pacific Railroad depot was torn down and moved to Benicia in 1902. It remains standing in Benicia, where it currently serves as a visitor center.

Banta's historical sites include the Banta Inn, established in 1879 [1]. The Inn is well known in the area because some local residents believe it to be haunted [2].

All content from Kiddle encyclopedia articles (including the article images and facts) can be freely used under Attribution-ShareAlike license, unless stated otherwise. Cite this article:
Banta, California Facts for Kids. Kiddle Encyclopedia.