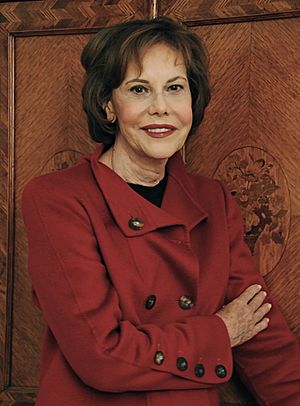 Barbara Goldsmith (Barbara Joan Lubun; May 18, 1931 – June 26, 2016) was an American author, journalist and philanthropist. She was born in New York City. She received critical and popular acclaim for her best selling books, essays, articles and her philanthropic work. Her best known work was Little Gloria.

She was awarded four honoris causa doctorates, and many awards. She was elected to the American Academy of Arts and Sciences. She was honored with two Presidential Commissions, the New York State Council on the Arts and honored by The New York Public Library Literary Lions. In 2009, she received the Knight’s Cross of the Order of Merit medal from the Republic of Poland.

In November 2008, Goldsmith was elected a “Living Landmark” by the New York Landmarks Conservancy. She had three children and six grandchildren. The Financial Times said that "Goldsmith is leaving a legacy—-one of art, literature, friends, family and philanthropy."

All content from Kiddle encyclopedia articles (including the article images and facts) can be freely used under Attribution-ShareAlike license, unless stated otherwise. Cite this article:
Barbara Goldsmith Facts for Kids. Kiddle Encyclopedia.