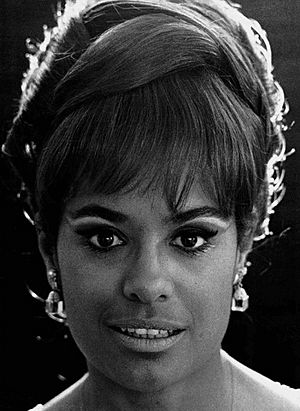 Barbara Jean McNair (born 4 March 1934 – 4 February 2007) was an American musician and actress. She became very popular in the 1960s. She was a guest on many television programs, including The Bell Telephone Hour, The Steve Allen Show and The Hollywood Palace. Her Broadway play credits included No Strings and The Body Beautiful in the 1960s and 1970s.

McNair was born in Chicago. Around her seventies, she lived in Los Angeles. She died there resulting from throat cancer, age seventy-two.

All content from Kiddle encyclopedia articles (including the article images and facts) can be freely used under Attribution-ShareAlike license, unless stated otherwise. Cite this article:
Barbara McNair Facts for Kids. Kiddle Encyclopedia.