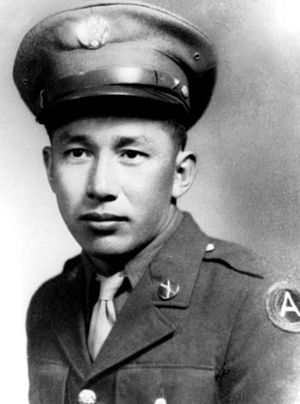 In this Japanese name, the family name is Hajiro.

Barney Fushimi Hajiro (September 16, 1916–January 21, 2011) was a United States Army soldier. He received the Medal of Honor because of his actions in World War II.

Hajiro was born in Hawaii to Japanese immigrant parents He is a Nisei, which means that he is a second generation Japanese-American. He grew up in a rural area. According to a friend who spoke at his funeral,

"As a plantation boy, he probably learned some things from his Japanese schoolteacher or principal. . . . He respected his principal and his family values. It all comes together; it builds a guy."

Hajiro volunteered to be part of the all-Nisei 442nd Regimental Combat Team. This army unit was mostly made up of Japanese Americans from Hawaii and the mainland.

For his actions in October 1944, Hajiro was awarded the Army's second-highest decoration, the Distinguished Service Cross (DSC). In the 1990s, there was a review of service records of Asian Americans who received the DSC during World War II. Hajiro's award was upgraded to the Medal of Honor. In a ceremony at the White House on June 21, 2000, he was presented with his medal by President Bill Clinton. Twenty-one other Asian Americans also received the medal during the ceremony, but only seven of them were still alive.

Hajiro was recommended for the Victoria Cross. He received the British Military Medal in 1948.

In 2004, France made him a member of the Légion d'honneur.

All content from Kiddle encyclopedia articles (including the article images and facts) can be freely used under Attribution-ShareAlike license, unless stated otherwise. Cite this article:
Barney Hajiro Facts for Kids. Kiddle Encyclopedia.