Barrow Hill Roundhouse, until 1948 known as Staveley Engine Shed, is a former Midland Railway roundhouse in Barrow Hill, near Staveley and Chesterfield, Derbyshire , now serving as a railway heritage centre.

Staveley Roundhouse was built to a standard Midland Railway square shed design in 1870 with a central turntable under cover. After 1948 it became known as Barrow Hill so as not to confuse it with the ex-Great Central shed nearby. It was operational from 1870 until 9 February 1991.

After closure, the building was heavily vandalised. After lobbying of the local council, the building was Grade II listed by the Department of the Environment in February 1991. Following negotiations with the British Railways Property Board, Chesterfield Borough Council became the new owners of the shed and nearby yard on 20 December 1996.

The council subsequently granted a recurring maintenance lease to the Barrow Hill Engine Shed Society, who secured and refurbished the site, including renewal of the original 1870 roundhouse glass roof, except for one section. Funding was provided by the council, Derbyshire County Council, the Transport Trust, North Derbyshire Training and Enterprise Council, European Regional Development Fund and the Government SRB fund. The site reopened to the public in July 1998.

Today, still retaining its connection to the UK national rail network through Network Rail, it is the home to many preserved British railway locomotives. The Harry Needle Railroad Company also store and maintain a number of operational lease locomotives on site. As well as the main roundhouse building, Barrow Hill is also home to the former Pinxton Signal box. Relocated after closure, it has since been refurbished and fitted out as per a typical day in its last year of use for Network Rail. 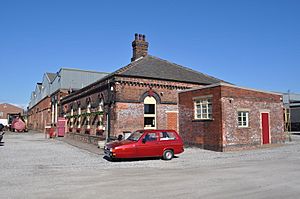 The Roundhouse in March 2011

Note: Only preserved locomotives are listed below. There are also various locomotives either stored or under repair that are not listed here, which are owned by commercial entities on site.

There is an annual beer festival held at Barrow Hill Roundhouse. The CAMRA held event is held in May each year and attracts brewers of beer, ales, lagers ciders and other drinks from around the country. The event hosts live music and there are 350 real ales, ciders and craft beers, along with a prosecco and gin bar. During the event, a train operates to give rides to visitors.

All content from Kiddle encyclopedia articles (including the article images and facts) can be freely used under Attribution-ShareAlike license, unless stated otherwise. Cite this article:
Barrow Hill Engine Shed Facts for Kids. Kiddle Encyclopedia.