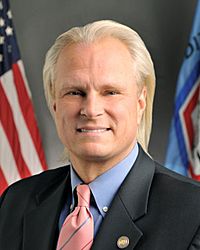 Bartholomew Hamilton Chilton (May 1, 1960 – April 27, 2019) was an American civil servant. He was Commissioner at the Commodity Futures Trading Commission (CFTC) from 2007 to 2014. He notably had long hair and wore cowboy boots. He was once called "the modern-day Eliot Ness" for wanting the CFTC to charge fraud. At the time of his death, he was a host of RT's Boom Bust. He was born in Wilmington, Delaware and grew up in Ogden Dunes, Indiana.

All content from Kiddle encyclopedia articles (including the article images and facts) can be freely used under Attribution-ShareAlike license, unless stated otherwise. Cite this article:
Bart Chilton Facts for Kids. Kiddle Encyclopedia.