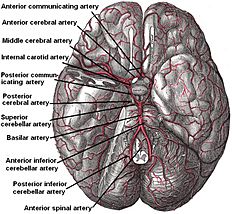 Inferior view (from beneath) of the arteries which supply blood to the brain. Basilar-type migraines usually occur in the area supplied by the basilar artery, but other parts of the brain outside of this area may also be affected.

The occipital region circled. The symptoms of a Basilar-type migraine often start here and/or may affect both sides of the brain at the same time.

Basilar-type migraine (BTM) is a type of migraine with aura that causes a headache which usually starts in the occipital region which is in the lower back part of the brain. The symptoms that are believed to start in the brainstem, occipital cortex, and cerebellum and the pain may affect both sides of the brain at the same time.

Most people who have basilar-type migraine also have migraines with aura without the basilar symptoms. This type of migraine is usually more common in young people between about 10–19 years of age.

The word Basilar comes from the Middle French word basilaire: of or related to the base. In medicine it usually refers to the base or bottom of a body part especially the skull.

All content from Kiddle encyclopedia articles (including the article images and facts) can be freely used under Attribution-ShareAlike license, unless stated otherwise. Cite this article:
Basilar-type migraine Facts for Kids. Kiddle Encyclopedia.