Kids Encyclopedia Facts
This page is about a genus of large corytophanid lizards. For the mythological creature, see Basilisk. For other uses, see Basilisk (disambiguation).

Basiliscus is a genus of large corytophanid lizards, commonly known as basilisks, which are endemic to southern Mexico, Central America, and northern South America. The genus contains four species, which are commonly known as the Jesus Christ lizard, or simply the Jesus lizard, due to their ability to run across water for significant distances before sinking due to the large surface area of their feet.

Both the generic name, Basiliscus, and the common name, "basilisk", derive from the Greek basilískos (βασιλίσκος) meaning "little king". The specific epithet, vittatus, which is Latin for "striped", was given in Carl Linnaeus' 10th edition of Systema Naturae.

Basilisks on average measure 70 to 75 cm (28 to 30 in) in total length (including tail). Their growth is perpetual, fast when they are young and nonlinear for mature basilisks. Their long crest-like sails, reinforced in three distinct points (head, back, and tail), confer the impression of creatures such as Dimetrodon and Edaphosaurus. Their skin is shed in pieces.

Basilisks sometimes run bipedally. Basilisks have the ability to "run" on water, and because of this, they have been dubbed the "Jesus Christ lizard" in reference to the biblical passage of Matthew 14:22-34. On water, basilisks can run at a velocity of 1.5 meters (4.9 feet) per second for approximately 4.5 meters (15 feet) before sinking on all fours and swimming. Flaps between their toes help support basilisks, creating a larger surface and pockets of air, giving them the buoyancy needed to run across water. They can also sustain themselves on all fours while "water-walking" to increase the distance travelled above the surface by about 1.3 meters (4.3 feet).

A similar behavior, running bipedally across water, is known from the sailfin lizards and a few species of anole lizards. Basilisks and sailfin lizards share the specialized toe fringes, which however are lacking in the anoles.

Basilisks can burrow into sand to hide from predators; a ring of muscles around both nostrils prevents sand from entering the nose.

Basilisks are abundant in the tropical rain forests of Central and South America, from southern Mexico to Ecuador and Venezuela. 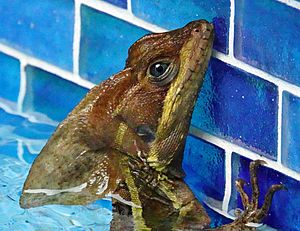 The species Basiliscus vittatus (brown basilisk) has been introduced to Florida. It has adapted to the colder winters by burrowing into leaf litter for warmth. Current reports sight the brown basilisk as far north as Fort Pierce, on the state's East Coast, where small groups have crept up the North Fork of the Saint Lucie River. Mainly it has been seen in Boca Raton and other cities in Palm Beach County. as seen in this photo taken in West Palm Beach, Florida.

All content from Kiddle encyclopedia articles (including the article images and facts) can be freely used under Attribution-ShareAlike license, unless stated otherwise. Cite this article:
Basiliscus (lizard) Facts for Kids. Kiddle Encyclopedia.