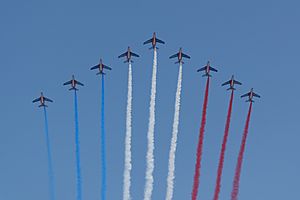 The Bastille Day military parade is a French military parade in Paris. It traditionally takes place every July 14th in the morning, on the famous Champs-Élysées. It celebrate the attack against the Bastille, the beginning of the French Revolution.

The units that parade that day, "descend" the Champs-Élysées, from the Arc de Triomphe to Place de la Concorde. Front of the Luxor Obelisk a large temporary official stand is assembled. It allows to welcome the President of the French Republic, members of the government, and all foreign guests. The military parade was cut into several sequences, somewhat in the manner of a play. 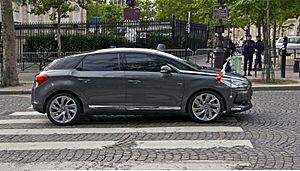 President of the French Republic leaves the Élysée Palace aboard his official car and joined the Arc de Triomphe, escorted by bikers of the Republican Guard. After that he boarded a military vehicle, his command car. From that moment, under the protocol, it fully embodies the role of "Chief of the Armies". Thus he reviews the troops stationed on the right side of the avenue. Aboard his military vehicle he rejoind and its place in the official gallery. A detachment of the Republican Guard makes military honors to the president.

An opening play then takes place. It usually lasts between 15 and 20 minutes. This is often the Band of the Republican Guard, accompanied by the choirs of the French army, and sometimes dancers and even a tenor. Usually musicians play La Marseillaise and the Chant des Partisans. 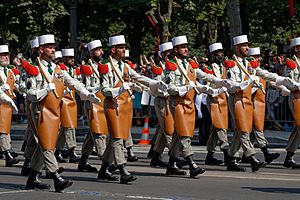 Légionnaires on the Bastille Day 2013 military parade in Paris

The troops parade always ends with the famous Légion Étrangère. This elite unit of the French army walks more slowly than other soldiers, so it goes last. 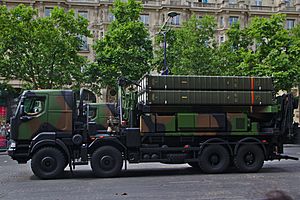 In first, it's motorcycles of the Gendarmerie Nationale and Police Nationale. And after armored military cars, tanks, troops trucks, and specialized vehicles are in Paris. At the end of vehicles parade it's red cars, ambulances and fire trucks of Paris Fire Brigade.

The Bastille Day military parade is very famous in France. All years more than 15 000 peoples come in Paris to see it. It is broadcast in live by two TV channels : TF1 and France 2.

All content from Kiddle encyclopedia articles (including the article images and facts) can be freely used under Attribution-ShareAlike license, unless stated otherwise. Cite this article:
Bastille Day Military Parade Facts for Kids. Kiddle Encyclopedia.