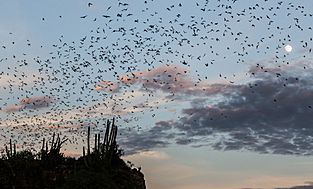 A bat-borne virus is a virus that is transmitted through bats. Bats are vectors for these viruses, they transmit them either through their saliva, or through their feces. Known examples of bat-borne viruses are the coronaviruses (such as those causing SARS and MERS), the Ebola virus, and some forms of rabies. Many bats live in groups, which remain close to each other for a long time. It is believed that this habit helps the spread of infections. Because of their ability to fly, bats also spread the viruses in a larger area than rodents do.

All content from Kiddle encyclopedia articles (including the article images and facts) can be freely used under Attribution-ShareAlike license, unless stated otherwise. Cite this article:
Bat-borne virus Facts for Kids. Kiddle Encyclopedia.