Beamish, previously named 'Pit Hill', is a village in County Durham, England, situated to the north east of Stanley. 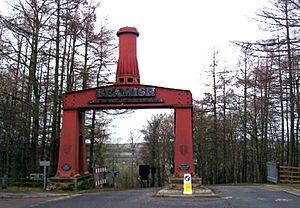 The entrance to Beamish Museum.

The village is contained within Hell Hole Wood and is home to Beamish Museum, an open-air museum seeking to replicate a northern town of the early 20th century. Its principal public house is the Shepherd and Shepherdess, near the Beamish Museum entrance.

To the south is the village of No Place (also called Co-operative Villas). North West Beamish lies in the conservation area of Beamish Burn. 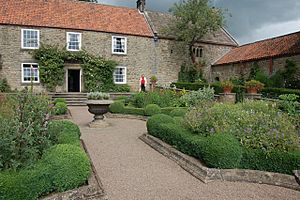 To the north of Beamish, Pockerley Manor preserves a rare though altered example of a pele tower in County Durham, probably dating from the 15th century with later alterations and additions. It is attached to a later farmhouse and the building is now known as Pockerley Manor. The tower has living accommodation built over a stone basement, the first floor reached through a stair built into the thickness of the wall, and the roof is largely original.

All content from Kiddle encyclopedia articles (including the article images and facts) can be freely used under Attribution-ShareAlike license, unless stated otherwise. Cite this article:
Beamish, County Durham Facts for Kids. Kiddle Encyclopedia.