Stanley is a former colliery town and civil parish in County Durham, England. Centred on a hilltop between Chester-le-Street and Consett, the town lies south west of Gateshead.

Stanley was formerly divided into three distinct settlements – the main town of West Stanley and the mining villages of East Stanley and South Stanley. Through a process of gradual expansion, these have become amalgamated into one town, with East and South Stanley no longer officially used as town names (although they are still recognised colloquially).

The civil parish of Stanley was created in 2007 and takes in not only Stanley, but the villages of Annfield Plain, Tanfield, Craghead, Catchgate, Tantobie, Tanfield Lea, South Moor, White-le-Head, Bloemfontein, Clough Dene, Greencroft, Harelaw, Kip Hill, The Middles, New Kyo, No Place, Oxhill, Quaking Houses, Shield Row, and West Kyo. The current Parish covers the vast majority of the former Stanley Urban District Council area, with the exception of Dipton and Burnopfield.

Stanley was first mentioned in 1211; however, some neolithic and Roman remains have been found in the area. The town's name is derived from the Old English for 'Stoney Field'.

The West Stanley Pit Disaster, one of the worst coal mining disasters in British history took place in Stanley at West Stanley Colliery on 16 February 1909 when over 160 people were killed in the Burns Pit disaster.

Over recent decades, Stanley has suffered hard times economically, with the closure of the coal pits followed by the loss of major employers at Ever Ready in nearby Tanfield, as well as the closure of both the British Steel plant and Shotley Bridge General Hospital in the neighbouring town of Consett. Local businesses in Stanley town centre were also significantly affected by the development of the giant MetroCentre shopping complex in nearby Gateshead, with local trade decreasing as a result.

In 2000, Stanley briefly garnered attention in various national tabloid newspapers as well as BBC Radio 1's Chris Moyles Show when local curry house impresario Harresh Ramadan turned his Indian takeaway restaurant on Front Street into a fish-and-chip shop and renamed it Harry Ramadan's, a spoof on the more famous and well-known Harry Ramsden's chain, with signage in an identical font and colours. The Harry Ramsden's chain sued, citing breach of copyright, with Ramadan backing down shortly after the national publicity had subsided. Soon thereafter, the shop took on new ownership and adopted the new name Jump 4 Joy's before closing down entirely in 2001.

In 2005, the Office of the Deputy Prime Minister granted permission to plans to form a Stanley Town Council. This followed a campaign by local people, including a petition of over 2000 names, although this petition only represented 10% of the population that would be covered by the new Town council. Campaigners promised that the new Town Council would increase the pace of regeneration within the town.

In 2008, an arson attack left an historic building on Stanley Front Street in ruins along with a billiards club and several shops below. November 2008 saw the demolition of the burnt buildings.

The town now stretches into what were formerly neighbouring villages and towns such as Annfield Plain to the west and Beamish and Pelton to the east. This sometimes creates confusion over which local authority is responsible for certain areas, particularly around the Durham-Gateshead border to the northeast near the Causey Arch. 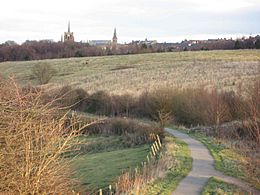 Stanley from the nearby Consett to Sunderland branch of the Coast to Coast cycle route.

The Sustrans C2C Cycle Route, a 140-mile (230 km) bicycle route connecting Whitehaven on the west coast of Cumbria to Sunderland on England's north east coast, passes along the southern boundary of Stanley.

The Lamplight Arts Centre, founded in 1960 and entirely refurbished in 2003, hosts concerts and recitals by local and national musical acts as well as small plays, exhibitions, classes and seminars.

Stanley is renowned for its annual summer playscheme situated at Stanley Youth Centre. This has been running since 1972 and is organised and run by a group of local people, recruiting international volunteers through YAP (Youth Action for Peace). The scheme runs for the first two weeks of the summer holiday, with children participating in games, activities and trips to local cultural and leisure venues.

Stanley Youth Centre offers activities to young people Monday to Friday during school term as well as a summer programme. Located at the top of Tyne Road, facilities include a sports hall, pool table, table tennis, meeting rooms and coffee bar. The range of activities available include DJing, volunteering, Duke of Edinburgh Award, babysitting, first aid and youth work courses. The centre closed in 2016 after many decades of work with young people

From 1993 – 2007, the first weekend in August saw a number of local, national and international Blues artists and renowned musical acts descend on the town for the Stanley Blues Festival. In 2005, The Animals played a set which went down well with locals and visitors alike. However, as of early 2008, organisers announced that the Festival was to be discontinued due to insufficient funding.

In recent decades, with the decline of traditional industries and the encroachment of large supermarkets and chain stores, 'Old Stanley' has declined, with many locally owned shops and pubs closing.

The town's main shopping area, Front Street, is pedestrianised, housing independent shops alongside large chains such as Boots. A market is held on Front Street on Thursdays and Saturdays. There are also supermarkets such as Asda and Iceland located within the town. Tesco may construct a new supermarket on the Clifford Road Retail Complex site, which currently accommodates the Clearance Bargains store and a range of empty buildings that had previously housed Kwik Save, Presto, a furniture shop, and an indoor-market.

Refurbishment of Stanley town centre in recent years has seen the opening of a new solar-powered bus interchange and an extension to the Louisa Centre leisure facility incorporating a new town swimming pool. Future redevelopment will see the opening of a new health centre and a Sure Start children's centre.

For more details, see List of schools in Durham

As well as a number of primary schools, Stanley contains two secondary schools. These are:

The town is also served by St Bede's Catholic School and Sixth Form College, based in the nearby village of Lanchester.

All content from Kiddle encyclopedia articles (including the article images and facts) can be freely used under Attribution-ShareAlike license, unless stated otherwise. Cite this article:
Stanley, County Durham Facts for Kids. Kiddle Encyclopedia.