Crook is a historic market town in County Durham, in the North East of England.

Located a couple of miles north of the River Wear, Crook lies about 9 miles (14.5 km) south-west of the historic city of Durham and 5 miles (8km) north-west of Bishop Auckland. The A690 road from Durham turns into the A689 leading up through Wolsingham and Stanhope into the scenic upper reaches of Weardale (an Area of Outstanding Natural Beauty). Crook is consequently sometimes referred to as the "Gateway to Weardale".

The centre of Crook, a designated conservation area, features a good variety of shops and businesses with the market held on Tuesdays and Saturdays. There are two prominent churches, the centrally located St Catherine's CE and Our Lady Immaculate & St Cuthbert's RC on Church Hill. On top of the hills to the east sits Crook Golf Club, its challenging 18 hole course offering spectacular views of the local countryside. For a town of its size Crook also features a good selection of pubs, cafes and restaurants.

Crook is the 10th largest settlement in County Durham and the 35th largest in the North East of England as of 2016.

Crook first appeared as an agricultural village around 1795 although its surrounding districts – Billy Row, Stanley, White Lea, Roddymoor and Helmington Row – were established much earlier. In these days Crook was predominantly farmland; however, it also had an Inn and a blacksmith shop, consequently the primary field of employment was within the agricultural industry. 40 years later; Crook became a mining village, and thrived as the coal was very close to the surface and soon there were over 20 mines around the Crook area, and by the end of the nineteenth century the town had developed rapidly in population and economy. However a lot of the population in the area had declined in the following century as the coal mines and industries closed with over 34% of the population being unemployed.

Crook has a famous amateur football team, Crook Town F.C.. Crook Town have won the FA Amateur Cup five times, most recently beating Enfield F.C. in 1964, before the cup was abolished in 1974. This record is second only to Crook's near neighbours, Bishop Auckland F.C.. The club have also reached the third round of the FA Cup and formed a key role in the development of FC Barcelona, playing a number of friendly matches in the 1910s and 1920s.

The town is also home to oldest purpose built Cinema in the North, built as the Electric Palace and opened on 21 November 1910. Currently the building is a Car Parts and Accessories shop but a group was set up in 2015 with the intention of restoring the building back to a working cinema. Much of the original interior features remain inside.

Crook has a backdrop of traditional and modern buildings. The tallest building in the town is the Council Building. It has 5 floors and at about 100 ft, it is a prominent feature of the Crook skyline. However, the council building is dwarfed by Crook's surrounding hills, which completely surround the town except on the south side. The tallest stands at 300 metres above the town, about 980 ft. The highest point in the town is on West Road where the height is 210 metres (about 690 ft).

Approximately 2 miles to the west of Crook on the A689 towards Wolsingham and Weardale, 400 yards past the roundabout junction with the A68, is the surviving World War II Harperley POW Camp 93, a Scheduled Ancient Monument within English Heritage. 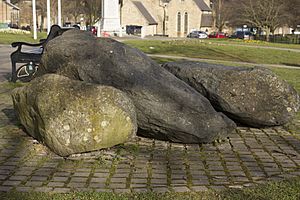 The Devil's Stone a.k.a. The Blue Stone

A World War 1 and World War 2 Cenotaph, located in the market place.

An erratic of Borrowdale volcanic. Originally located at Dowfold Hill, it is currently situated in the market place. 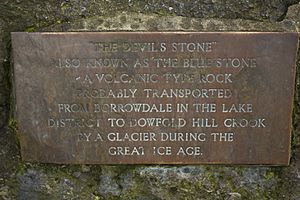 Crookfest is an all day music festival held on the Sunday of the early May Bank Holiday weekend within Crook AFC's Sir Tom Cowie Millfield ground. It is organised by Marshall Rippon on behalf of the football club and features around 20 bands over 3 stages with marquees erected on the pitch.

All content from Kiddle encyclopedia articles (including the article images and facts) can be freely used under Attribution-ShareAlike license, unless stated otherwise. Cite this article:
Crook, County Durham Facts for Kids. Kiddle Encyclopedia.