Cerotoma trifurcata (also known as the bean leaf beetle) is a species of beetle in the Chrysomelidae family that can be found in the Eastern and West United States. 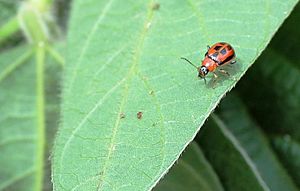 Adult beetles are 3.5–5.5 millimeters (0.14–0.22 in) in length, and have a punctated elytron at their posterior region. Morphs can occur with red or yellow elytra and four black spots as well as a non-spotted morph. The head is always black.

The beetle feeds mostly on vegetables that are in the cotyledon-stage, such as cucumbers, cucurbits, pumpkin, and squash. It also can be a pest of legumes such as soybean. In early spring, adult beetles emerge to feed on legumes, such as alfalfa, before crops such as soybeans and green beans are available.

Larvae feed in the soil on plant roots, while adults consume vegetative tissue on host plants. Bean leaf beetle can also transmit bean pod mottle virus to beans through feeding. Feeding can significantly affect crop yield in some cases, although such damage is highly dependent on beetle densities in a field. Insecticides, such as pyrethroids, and delayed planting dates have been used to manage bean leaf beetle populations, but conditions when such measures are effective vary. Insecticidal seed treatments alone do not increase yield in areas prone to bean leaf beetle feeding or virus transmission.

All content from Kiddle encyclopedia articles (including the article images and facts) can be freely used under Attribution-ShareAlike license, unless stated otherwise. Cite this article:
Bean leaf beetle Facts for Kids. Kiddle Encyclopedia.