Beausoleil Island is one of the last refuges for the seldom-seen Eastern Massasauga rattlesnake, the only snake in Ontario whose venom is potentially dangerous to humans. On sunny days, Georgian Bay's cobalt waters form a striking counterpart to the light blue of the sky, the pinkish rocks of the Canadian Shield, and the dark green of the park's famous windswept pines. The Fairy Lake and Cambrian Trails, in the north of the island, offer especially striking views of these natural features. 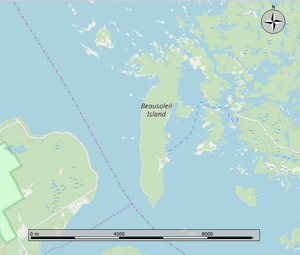 Map of the island.

Artifacts from as far back as the Middle Archaic period, 7,000 years ago, have been found, such as an Otter Creek projectile made from Onondaga chert. The remains of ancient pottery, tools, and hunting implements that have been found on Beausoleil have enabled archaeologists to determine that the island was, in all probability, used as a summer camp by early hunting and gathering cultures. These include primarily a Middle Woodland site occupied by the Point Peninsula and Saugeen groups (2,400-1,300 years ago), and the Algonkian speaking Odawa (or Ottawa) of the Late Woodland Period (600–400 years ago). Several other cultures have also left evidence of their occupation on the island.

Beausoleil Island also played a significant role in the birth of residential camping in Ontario. Once the home of several summer camps for youth, as of 2018[update] two YMCA Camps still call the island home: YMCA Camp Kitchikewana (YMCA of Simcoe/Muskoka) and YMCA Camp Queen Elizabeth (YMCA of Western Ontario). Former staffers at these two camps went on to become great leaders in the Canadian camping movement: Win Smith, Jack Pearse, Ron and Mickey Johnstone among them.

The island was designated a National Historic Site of Canada in 2011.

All content from Kiddle encyclopedia articles (including the article images and facts) can be freely used under Attribution-ShareAlike license, unless stated otherwise. Cite this article:
Beausoleil Island Facts for Kids. Kiddle Encyclopedia.