Beaver Run is a tributary of County Line Branch in Northumberland County and Montour County, in Pennsylvania, in the United States. It is approximately 3.9 miles (6.3 km) long and flows through Lewis Township in Northumberland County and Anthony Township in Montour County. The watershed of the stream mostly consists of agricultural land. The watershed lies over rock of the Onondaga and Old Port Formation, the Keyser and Tonoloway Formation, and the Hamilton Group. It lies over soil of the Chanango-Pope-Holly series, the Hagerstown-Edom-Washington series, and the Watson-Berks-Alvira series. The stream experiences siltation and organic enrichment.

A. Joseph Armstrong described Beaver Run as "small and overgrown" in his book Trout Unlimited's Guide to Pennsylvania Limestone Streams. 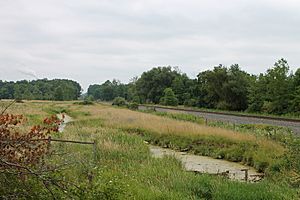 Beaver Run begins in eastern Lewis Township, Northumberland County. It flows southeast for a short distance before turning southwest and then south. The stream then crosses Pennsylvania Route 44 and Pennsylvania Route 54 before crossing a Conrail railroad and turning southeast. It flows in this direction for some distance before passing by the community of Schuyler and leaving Lewis Township.

Upon leaving Lewis Township, Beaver Run enters Limestone Township, Montour County. Here it turns east for a short distance and then turns southeast. The stream then crosses a set of railroad tracks and further downstream reaches its confluence with County Line Branch near the eastern border of Limestone Township.

The water of Beaver Run is relatively warm.

The watershed of Beaver Run is in the Appalachian Mountain section of the ridge and valley physiographic region.

Beaver Run is not influenced by limestone.

Nearly all of the watershed of Beaver Run is agricultural land. However, there are some small patches of forested land. In addition to the townships that the stream flows through, the community of Turbotville is also in the watershed.

The Beaver Run Bridge was built over Beaver Run in its lower reaches in 1915. It is a closed-spandrel arch bridge that is 48.9 feet (14.9 m) long. The bridge is open to traffic.

Beaver Run has been described as overgrown. The Montour County Natural Areas Inventory recommends planting native trees along the stream.

All content from Kiddle encyclopedia articles (including the article images and facts) can be freely used under Attribution-ShareAlike license, unless stated otherwise. Cite this article:
Beaver Run (County Line Branch) Facts for Kids. Kiddle Encyclopedia.